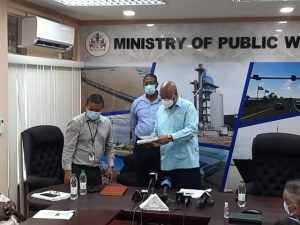 Public Works Minister Juan Edghill receives a report of the Board of Inquiry into the sunken trawler from Captain John Flores.

Public Works Minister Juan Edghill says an inquiry has found that the captain of the trawler that sank several weeks ago had informed Noble House Seafoods that the vessel had been taking in water.

However, Mr Edghill says that Noble House never reported the occurrence until nine hours later. He says the trawler captain was not licensed and he and his crew were not trained in safety measures.

He said the inquiry found that a fake licence had been produced by the now deceased captain to Noble House Seafoods.

He said the report of the Board of Inquiry’s investigation into the marine incident involving trawler World Friend 307 on February 19, 2022 would be made public and provided to the families of the three deceased persons.

The Public Works Minister said there was also no evidence  that a certified marine surveyor surveyed this boat and said that this was worthy for sea.

“The company has shown no evidence that it has a competent person to certify a vessel in and out of drydock,” he said.

Mr Edghill said once culpability or negligence is established, Attorney General Anil Nandlall would be asked to advise on compensation. He said the captains work on a freelance basis with fishing companies.

Director General of the Maritime Administration, Stephen Thomas said if the company had notified the authorities that the trawler had been in distress, nearby vessels could have responded to a May Day call or th