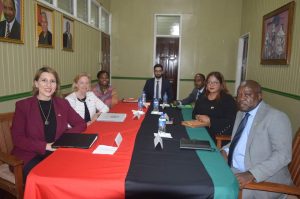 Leader of the People’s National Congress Reform (PNCR), Aubrey Norton said he on Thursday told the United States government’s Caribbean Chief  Dianne Feinstein that the mechanism set up to manage Guyana’s oil revenues excludes elected representatives of almost half of the population.

Mr. Norton said she committed to taking back his party’s concerns to the US, but he hoped that the American administration would place heavy emphasis on democracy. “Our task, as a political party, is to outline the political situation in Guyana and the United States contend that they are committed to democracy  and we expect them to look at the Guyana situation to discern what is undemocratic and work with us to ensure we develop a democratic society,” he said. Asked to what extent he was optimistic that would happen, the PNCR Leader said, “we would look to see the outcome” and “there was scope for hope” because the US has clear-cut positions on those issues.

With government using its majority on the parliamentary appointments committee to vote down the four opposition nominees to sit on the Board of the Natural Resources Fund (NRF) as the parliamentary representative, the PNCR Leader said that exclusionary approach was brought to the attention of the Deputy Assistant Secretary for the Caribbean and Haiti.  “I generally indicated that what exists is a pro-government, non-representative board that is not disposed to protecting Guyana’s interest but promoting the interest of the People’s Progressive Party,” Mr. Norton told Demerara Waves Online News/ News-Talk Radio Guyana 103.1 FM.  After the opposition nominees- Chartered Accountant Christopher Ram,  Economist Mr. Low, Petroleum Engineer Dr. Vincent Adams and Economics Professor Clive Thomas-  were rejected by the governing PPP, they instead picked former PNCR parliamentarian, Dunstan Barrow.

The PNCR Leader said he impressed on the State Department official the need for equitable distribution of the oil resources for the benefit of all Guyanese.

The Private Sector Commission, regarded by some as a close PPP ally in and out of government, has nominated prominent city business executive Ramesh Dookhoo to the NRF Board. The President is entitled to appoint three other members of his choice to the governing Board.

Also raised with  Ms. Feinstein, according to the PNCR Leader, was his party’s need to have a “clean” voters list as a condition for a credible election. “We have indicated to them that we do not see a democracy or an election, as reflective of the popular will, if there is a bloated list and demanded their support for a clean voters’ list since we believe that it’s critical to free and fair elections,” he said. The opposition coalition maintains that the March 2, 2020 elections were rigged by the PPP while the PPP consistently points to efforts to declare the coalition the winner contrary to the Statements of Poll which were proven in the results of the national vote recount.

Also on the electoral front, the PNCR Leader said he told the State Department official that the Chairman of the Guyana Elections Commission (GECOM), Retired Justice Claudette Singh seemed to be pro-PPP. “The Chairman of GECOM seems to have no independence and just vote regardless with the government thus compromising GECOM since the Chairman is expected to be impartial,” Mr. Norton said. The commission is almost evenly split between three representatives each of the PNCR-controlled A Partnership for National Unity+Alliance For Change (APNU+AFC) and the PPP, with the Chairman required to vote with either side if there is no majority among the six.

The PNCR Leader said he also told the Deputy Assistant Secretary for the Caribbean that the Guyana Police Force was being politicised and there was “illegal incarceration” of persons for 72 hours in the absence of reasonable suspicion that they have committed crimes.

His party, he said, also sought support from the United States on the border controversy between Guyana and Venezuela. Guyana’s case on the border issue is being adjudicated by the International Court of Justice.

The PNCR also raised what it said was “no access” to the publicly-funded State media as part of a plan to dominate all facets of life, corruption, and returning the police force to being unprofessional.

The Deputy Assistant Secretary of Caribbean Affairs is due to meet with Vice President Bharrat Jagdeo on Friday. Up to Thursday, sources said she would not be able to meet with the Private Sector Commission on this trip.