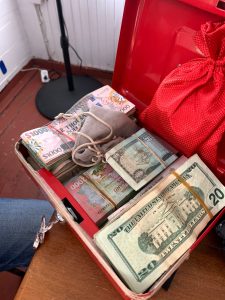 The cash police said they found at the home of a businessman on East Street, North Cummingsburg, Georgetown.

A city businessman is among four persons arrested in connection with the alleged discovery of an estimated GY$19.8 million in local and foreign currencies, a large quantity of smuggled liquor and two kilogrammes of marijuana at his Georgetown home, police said.

The Guyana Police Force said the cash, marijuana and un-customed liquor were seized from his house on East Street, North Cummingsburg, Georgetown.

Police said they also seized three Digital Video Recorders (DVRs) from another house that is owned by the 30-year old businessman at Providence, East Bank Demerara.

Those arrested during the raid on Wednesday afternoon are his wife, mother-in-law and his mother-in-law’s 18-year old cousin, 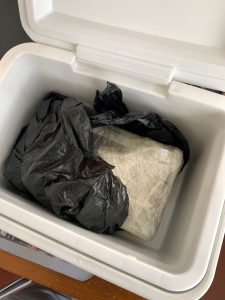 The marijuana in a cooler that police said they found at the home of a businessman on East Street, North Cummingsburg, Georgetown.

Police said they also found a 2.030 kilogrammes of marijuana in a small blue and white cooler with the businessman’s logo  on top of a cupboard.

The contraband, narcotic, cash and other items were lodged with the custodian of the Property Room.