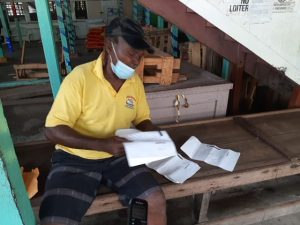 Several owners of land in Section G Beterverwagting, East Coast Demerara on Thursday afternoon turned out at the Neighbourhood Council office to get answers about whether their lands have been sold behind their back/

When contacted, the lawyer said she was unaware of any links with JFL and that she was merely asked to write the letter.  The name of the client was not mentioned and JFL’s Damien Fernandes said that Ms. Glen-George was not one of his company’s lawyers. He reiterated that JFL was no longer interested in the land at BV. “No, no, no. We made a decision not to pursue that,” he told Demerara Waves Online News. “The position is the same when it was first brought to our attention that the acreage was somewhere that shouldn’t be sold,” he added.

After word of the now mysterious letter surfaced, several disturbed land owners turned out to meet with the Neighbourhood Council in session to ascertain what was going. Villager Mr. Padmore, who walked with a thick file of certificates of title and related documents, exited and told reporters that the Chairman informed him that  he had nothing to worry about and that his name was not on the list.

A visibly angry Clyde Westmoreland, who went with at least six certificates of title to meet with the Council, was adamant that his land would not be sold. “Land is not for sale…I don’t know why they are fighting for work. Every business they do, they are getting a back-notch. Say that people don’t have anything there? It’s village land? Wicked sets of people,” he said.

Back in December 2021, John Fernandes Limited had said that it had been no longer interested in the land for which it had reached an agreement with the Neighbourhood Council for GY$35 million.

The lawyer states that her client  “purchased” 143.10 acres of land  located at Section ‘G’ Beterverwagting from the Neighbourhood Council on November 30, 2021. “This missive serves to inform you that my client is ready, willing and able to complete the conveyance. In the circumstances, I shall be grateful if the necessary acts can be taken to ensure the filing, advertising and passing of transport in favour of my client,” she told the Overseer of the Beterverwagting-Triumph Neighbourhood Council, Michelle Otto.

The Overseer confirmed to reporters that she received the letter and that it was due to be discussed at Thursday afternoon’s meeting.

Council Chairman, Jimmaul Bagot told Demerara Waves Online News that he met with four villagers during the meeting on Thursday who went with their certificates of title. He said as far as he and JFL were concerned, the deal was off and steps were being taken to refund that company the down-payment of GY$20 million.