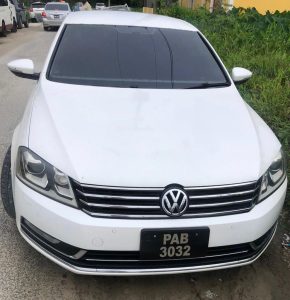 The car belonging to an employee of the Ministry of Health’s Drug Bond in which police say guns, ammunition and cash were found

An employee of the Ministry of Health’s Drug Bond at Diamond, East Bank Demerara was Monday arrested after police said they found a number of guns, ammunition and cash in his car, and he allegedly offered investigators GY$1.7 million to drop the charges, police said Monday.

“Well Sir tek de whole bag a money all I want is me freedom,” the Guyana Police Force quoted the suspect as saying. The motorcar owner requested his bag and he withdrew and offered the police investigators $1,750,000.00 cash to forego the said charges, police said. He was reportedly cautioned about the new offence- corrupt transaction with agent 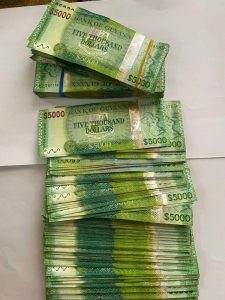 Investigators said after they found a 9MM Luger pistol without magazine and two rounds of 9MM ammunition and  one .380 pistol with magazine containing 7 matching rounds of ammunition  and 20 rounds of .380 ammunition in the suspect’s car bearing licence number PAB 3032, he initially offered GY$1,750,000.00 cash to forgo the charges while he was being questioned at the Golden Grove Police Station’s Criminal Investigations Department’s office about being in possession of the unlicensed guns and ammunition.

Investigators said they went to the Drug Bond to probe a simple larceny report committed there, and interviewed several employees who were fingered in the alleged crime. 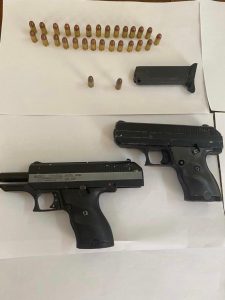 The guns and ammunition that police said were found in a duffel bag in a car owned by an employee of the Ministry of Health’s drug bond.

Police said they all denied the allegations and it was while searching the car which is owned by one of the employees that the guns, ammunition and cash were found in a duffel bag on the back seat.  The vehicle owner was cautioned of the offence committed and replied “Officer leh we deal with this before it reach de station, police said.

The other employees, who were arrested during a sting operation, remain in custody.