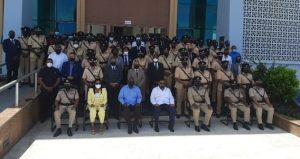 President Irfaan Ali on Thursday recommended that representatives of the judiciary and the Guyana Police Force discuss problems and find solutions and cost them.

“I want to propose that we have a strategic session because the judiciary can also help us to identify areas of weakness and we can also raise concerns so unless we can come in a room, we can discuss issues, we can discuss the future direction of different arms of government and the changes that are required, we will not be able to build an integrated model to meet the future requirement,” he said.

Among those present at the opening of the 2022 Annual Police Officers Conference were the Director of Public Prosecutions (DPP), Shalimar Hack; Chancellor of the Judiciary, Yonette Cummings and Chief Justice Roxanne George-Wiltshire, Minister of Home Affairs Robeson Benn as well as top officers of the police and defence forces.

The President said such a closed door strategy session  should identify cross-cutting common issues, and  arrive and cost solutions. “We must not be in a public debate sometimes on where weaknesses are. We must be able to be in a room and strategically work on those weaknesses, those challenges and come up with solutions,” Dr. Ali added.

Judges and magistrates continue to complain about the absence of police witnesses. Several months ago, the government had raised concerns about the decisions of the Chancellor of the Judiciary and Appellate Judge, Dawn Gregory in a number of political cases.

Accused persons on remand have for decades been complaining that they are on remand for years awaiting trials.

The Guyana Bar Association (GBA) had criticised Local Government Minister Nigel Dharamlall for his utterance against the judges. He subsequently amended his Facebook post, but other government ministers did not hide their discontent.