Norton says on a mission to repair PNCR; 2020 election campaign was “worst” 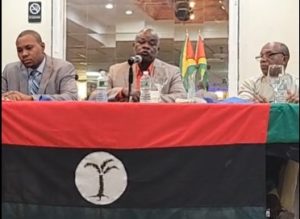 People’s National Congress Reform (PNCR) Leader, Aubrey Norton on Wednesday credited his now three-month long leadership with establishing party groups across Guyana and gearing up to put behind the 2020 general election campaign that he deemed the “poorest run” .

“I don’t want to get into the details of what the People’s National Congress Reform has become under the previous leadership. All I can say to you is that I hope to restore the party to the glorious days of Forbes Burnham,” in reference to the PNCR’s Founder Leader.

In an interactive session with party supporters at a town hall meeting in Brooklyn, New York, he bemoaned the condition of the party that he inherited, saying that the office and boardroom of the Leader had fallen into disrepair and had to be overhauled “overnight” in time to accept visiting diplomats.

Mr. Norton also said Congress Place, the PNCR’s Headquarters at Sophia, barely had a few junior workers. “I have inherited a party that has four categories of workers: guards, drivers, clerks and handymen. That’s what I inherited from the previous leadership,” he said.

The PNCR, which is the largest partner in the opposition coalition of A Partnership for National Unity+Alliance For Change (APNU+AFC), he said, had run a sloppy election campaign for the March 2020 polls. “I was on record as saying that the poorest run election in my fifty years of involvement in the PNCR is the 2020 election. I have no apology to make. It’s the worst ran elections,” he said.  The PNCR Leader partly attributed that to the fact that “one of the realities of the last election is that a lot of the people who knew political work and knew what to do were marginalised.” A manual on conducting elections, he added, had been totally ignored.

The Guyana Elections Commission (GECOM) had declared that APNU+AFC had won 217,920 votes and the People’s Progressive Party Civic (PPPC) 233,336 votes.

He said the coalition could have performed better if it had been properly organised “on the ground” and in so doing attract sufficient funding. “We cannot not have a ground machinery and hope to win an election,” he said. He singled out then PNCR General Secretary Amna Ally for failing to ensure that the party campaigned in PPP strongholds, even as that party was doing so in PNCR bases. He added that those who had been in the leadership had been “out of touch” with the ground.

Mr. Norton indicated that the PNCR would putting in place professional staff to do the required work, ramping up its media, public relations and election campaign machinery and organisational capacity. He said a  United States-based company was expected to be hired “to work with us to prepare for elections.” “In fact, some of them have indicated that they are willing to finance it and we are working on that,” he said. 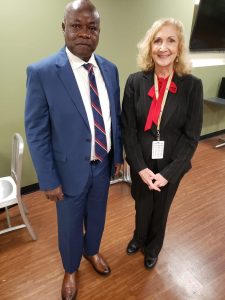 The PNCR Leader said he had begun reaching out to the international community, and for the first time he publicly stated that when a Ghanaian delegation visited Guyana “I met the Ghanaians” and he reported that to his party’s Central Executive. “In fact, it is just for me to choose the time that I am going to go to Ghana and Nigeria. I do believe that we have to establish proper relationships with Ghana and Nigeria. ” he said. He dispelled claims that the PNCR had rejected an offer from, saying that Mr. Granger had done so.

Overtures, he said, are also being made to Barbados’ Prime Minister Mia Mottley through at least two intermediaries. Plans are also in the pipeline to reach out to other political parties across the Caribbean.

Mr. Norton said he was continuing his countrywide outreaches and if the PPP continues to marginalise opposition supporters, it could reach a stage where government officials would be unable to visit his strongholds.

Touching on the likelihood of protesters being locked up, he said a legal team was being assembled and money mobilised to ensure they are properly represented. “We always have got to get resources to protect our people because it will pose more harm if our people are incarcerated and they can’t do anything to get them out,” he said.

While the PNCR Leader said the AFC was split in two over whether to remain in the coalition, he expressed commitment  to coalition politics and disclosed that the Working People’s Alliance (WPA) was on the verge of signing a pact that would see its return to APNU. “As a party, we opt for coalition politics. What I don’t promise anybody to do is to be held at ransom and so I am prepared to work with everybody in the APNU, I am prepared to work with the AFC but I am not prepared to let the PNCR and the APNU held at ransom,” he said.

In apparent reference to Mr. Granger’s entry of the Guyana Nation Builders and the Equal Rights and Justice Party to APNU, he believed that they should have come with supporters. He is also wary about youths entering the PNCR and expecting special treatment and upward mobility. “I am clear in mind that I will mobilise youths, I will organise youths but they must not be treated as special,” he said.