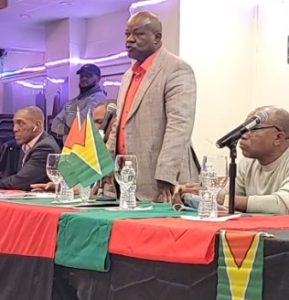 Leader of the People’s National Congress Reform (PNCR) Aubrey Norton on Wednesday laid down additional conditions for shared governance but said he had no faith in Vice President Bharrat Jagdeo because he had a track record of back-pedaling on decisions.

In an address and interaction with a large number of party faithful in New York, Mr. Norton said that in addition to a clean voters list he would first want to see the People’s Progressive Party Civic-led administration provide adequate funds to local councils in opposition strongholds such as Georgetown, Linden and New Amsterdam as well as allocate more cash in other areas of the budget. “I’m not going to engage you in achieving that. You have to show me goodwill first of all by giving the resources you need…and then you to increase the budgetary allocation to our support base,” he said.

He emphasised that he was committed to shared governance and “dialogue” but “I’m not going to speak to you give you what you want” especially against the backdrop of a PPP-PNCR constructive engagement in which the governing party had claimed that then party co-founder Janet Jagan did not agree. “When I look at the history, I am going to engage with you, I am going to talk with you but there will have to be definite things you agree on and you have to fulfill them before we can talk anything about shared governance,” he added. He said 49 percent recorded electoral support could not equal to zero.

Expressing grave distrust in Mr. Jagdeo, Mr. Norton refused to share anything with him because he is “selfish, he is covetous, he is everything that runs antithetical to cooperation and so while there is a predisposition to dialogue I don’t know Bharrat Jagdeo can be trusted even with his own shadow.”

The PNCR Leader accused the Irfaan Ali-led administration had only picked out Afro-Guyanese to take back lands after the PPP returned to office in August 2020. BK International’s lands were also targeted and a GY$20 million settlement had been reached with Cevon’s Waste Management owned by Morse Archer.

On the issue of its demand for a clean voters list, the PNCR is yet to meet with the Guyana Elections Commission which has since embarked on a three month continuous registration process.

A United States Agency for International Development (USAID)-funded Assessment on Democracy and Governance has recommended the need for executive power sharing to manage Guyana’s oil wealth. The assessment notes that the National Assembly does not provide the opportunity for kickstarting the process because of bitterness between the two major parties.