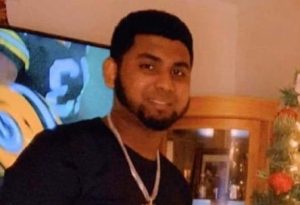 A United States (US)-based Guyanese was early Wednesday morning stabbed to death outside a wedding house at Corentyne and two of the three prime suspects have since been arrested, police said.

Dead is 21-year old Chatterpaul Lakhan also known as Rickash. The incident occurred at Grant 1802 Crabwood Creek, Corentyne, Berbice at about 1 AM Wednesday.

Police were informed that Lakhan and his relatives were at a wedding celebrating when the three suspects approached the yard, and were turned away by the family members. “They (suspects) became annoyed, left the yard and went into the street a short distance away from the wedding, and started to hit vehicles that were parked on the street,” the Guyana Police Force added.

The deceased and other family members went onto the street where an altercation ensued, during which the 21 year-old man received a stab to his stomach and collapsed on the ground.

Lackhan was picked up by family members and taken to the Skeldon Public Hospital where he was pronounced dead on arrival by a doctor.

The Radha Krishna Foundation recalled that he had been among the first batch of members who had earned the respect and admiration of his tutors and peers. “Lakhan has been a part and parcel of Radha Krishna Foundation since its inception in 2011, being a child of the local community. He attended our Summer Camps, regular classes, and has been a shining example as a young man in the community, both academically and socially, leading the way for his juniors.

Lakhan has volunteered for the Foundation as well until he migrated to the United States. As we reminisce on the fun times we have shared with Lakhan and the youths at the Foundation grounds, we remember his quiet attitude, his helpful and caring ways, and his sportsmanship in all the fun activities,” the Foundation said.