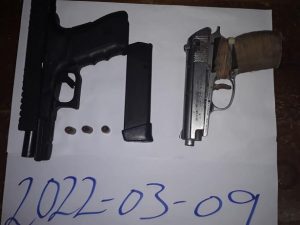 The handguns and ammunition that police said were found inside a house at Unity Street, Festival City.

Investigators said the guns were unlicensed.

One of the men tried to escape but was “pursued and apprehended”. The Guyana Police Force said  a search ofthe property unearthed one 9MM Glock pistol along with three matching rounds of ammunition, stashed in a chair and one .32 Sterling pistol without magazine was found wrapped in a grey jeans on the bed.

“None of the men could produce a licence or explanation for the weapons and were arrested and placed in custody at East La Penitence Police Station pending investigation,” police said.