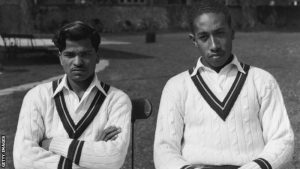 Former West Indies off-spinner Sonny Ramadhin has died at the age of 92.

Bowling in tandem with slow left-armer Alf Valentine, the pair took 59 wickets in a spectacular series win – having never previously won a Test in England.

Ramadhin took 11 wickets in the Lord’s Test – only his second international game – and was immortalised in song.

Musician Lord Beginner’s celebratory calypso tune referred to “those two little pals of mine, Ramadhin and Valentine” – and from then on, the duo’s careers were inextricably linked.

They became key players in the 1950s West Indies side which featured the legendary “three Ws” – Frank Worrell, Everton Weekes and Clyde Walcott, who were all subsequently knighted.

The first cricketer of East Indian origin to play for West Indies, Ramadhin’s best Test figures came against England at Edgbaston in 1957, when he took 7-49 in 31 overs against a star-studded line-up.

He went on to bowl a mammoth 98 overs in the second innings of that game, taking 2-179 as Peter May made an unbeaten 285 and the Test was drawn.

Having played in the Lancashire leagues as a professional, as well as for the first-class county side, Ramadhin settled in Lancashire after retirement.

He lived in Delph for the last 12 years of his life, and was president of nearby Friarmere Cricket Club, where his son Craig has played for the past 50 years.

The family connection with cricket extended to Ramadhin’s son-in-law Willie Hogg and grandson Kyle Hogg, who both played first-class cricket for Lancashire.