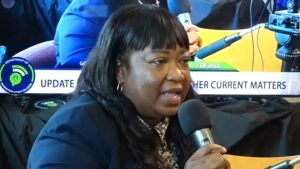 Richards, 48, a Guyanese residing at Fort Hill, is charged along with Hitesh Yadram, 43, also a Guyanese who resides at Great Mountain. Both are employees at ‘JTV’ and are charged with uttering a Fforged document and demanding property on forged document.

An arrest blotter released by the Royal Virgin Islands Police Force (RVIPF) on February 23, stated that both were granted bail to appear before the Magistrate’s Court on March 30, 2022. The arrests were made on Thursday, February 17.

According to reports, an alleged discrepancy in the accompanying documents was flagged by staff at the Labour Department. Reports indicate that an internal inter-agency investigation was mounted, and a decision was made to report the matter to the police for further investigations.

The work permit applications were made during a brief period when it became a requirement for applicants for work permit renewals provide three certificates of good standings – one each from the National Health Insurance (NHI), Social Security Board (SSB) and Inland Revenue Department (IRD).

This was done at the time to among other things ensure that employers were paying in deductions from employees’ salary as required by law.