An 18-year old man died on Thursday after the car he was driving slammed into the Demerara Distillers Limited (DDL) fence.

Police said that at about 08:15 hrs on the Diamond Public Road eastern carriageway, motorcar PAB 8239 driven struck the DDL fence.

Police say the car was being driven at a fast rate of speed when Salvador lost control of the vehicle and it struck the fence. As a result of the collision the vehicle was damaged extensively and the driver received injuries.

“He was taken out of the vehicle by public-spirited citizens in an unconscious condition and taken to the Diamond Diagnostic Centre where he was seen and examined by doctors on duty and died whilst receiving medical attention,” police said.

The body has been taken to Carmen’s Funeral Home awaiting post mortem examination.

As further inquiries are in progress, police are urging road users to exercise extreme caution, care, courtesy, consideration and common sense; especially during the rainy season when the roadways are wet and slippery. 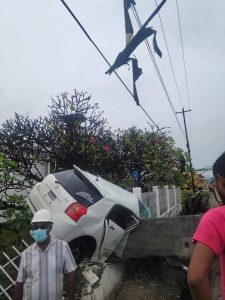