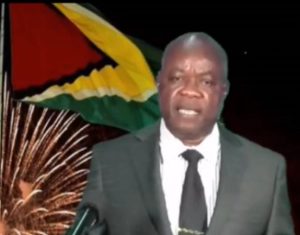 Leader of the People’s National Congress Reform (PNCR), Aubrey Norton on Wednesday promised that the opposition coalition would remove income tax if elected to government because Guyana is now an oil producer-exporter, in his message to mark Guyana’s 52nd Republic Anniversary.

“The PNCR wishes to make it clear that as your government-in-waiting, as part of the coalition, we will remove the burden of personal income tax from our people,” he said. Mr. Norton said the scrapping of the income tax was an “enduring obligation” to Guyanese “given the current favourable economic circumstances from oil and gas.”

In the 2022 National Budget, the government increased the income tax threshold to GY$75,000.

Vice President Bharrat Jagdeo has already cautioned against steep increases in wages and salaries because this will become unsustainable in the long-run when all of the hydrocarbons are exhausted. Instead, he has said that Guyana will invest heavily in health, education and physical infrastructure, including renewable energy, and agriculture to improve the overall quality of life.

The PNCR Leader used the opportunity to call on the Irfaan Ali-led administration to cut out corruption, reduce crime and better manage the COVID-19 pandemic with the huge oil and gas windfall. “It concerns the PNCR that Guyana is getting so much income but our people are getting less and at the same time the high cost of living is eating out the little that we get,” he added.  He said time has come for the People’s Progressive Party Civic administration to “stop serving their elite, their family and their friends and ensure that our people benefit from our national patrimony.”

Mr. Norton said the creation of a just, safe and multi-ethnic society for all Guyanese. “While there is much about our journey that we can celebrate and be proud of , we must work to rid our society of poverty, inequity, discrimination and injustice that are still extant in Guyana,” he said. He claimed that government has been discriminating against investors whose policy positions that might differ from the PPPC’s, a practice he said was preventing job creation and economic growth without depending on oil and gas. “This shortsightedness and growing practice of economic discrimination must be condemned and stopped,” said Mr. Norton.

Guyana became a Republic on 23rd February, 1970 under the then PNC-led government of Forbes Burnham. “He has made significant contribution to  the development of Guyana, mistakes apart,” said Mr. Norton who credited Mr. Burnham with the establishment of the National Insurance Scheme, agro-food self-sufficiency, and opening up of the hinterland.