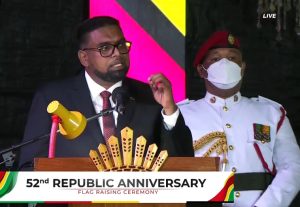 President Irfaan Ali on Tuesday- on the occasion of Guyana’s 52nd Republic anniversary- said he was open to constructive criticism but he urged Guyanese not to be distracted by baseless positions that are calculated to foment discontent.

“From the inception, let me be clear, I and my government are supportive of constructive criticism,” he said in his address to mark Guyana’s 52nd Republic anniversary.

Touting once again his ‘One Guyana’ platform, the President said Guyana must have healthy debate, exchange of views and critical examination of policies, programmes, initiatives and plans.

At the same time, he recommended that a balanced fact-based approach be taken in such criticisms. “These discussions must not be based on selfish agenda, biasness,  perception, propaganda, and feelings. Instead, they must be firmly rooted in facts and a pragmatic understanding of what is required in this rapidly changing Guyana,” he said in his address to the Flag Raising Ceremony held in the forecourt of Parliament Building.

In clear reference to criticisms by the People’s National Congress Reform (PNCR)-led A Partnership for National Unity+Alliance For Change (APNU+AFC) of the proposed gas-to-energy project,  Amaila Falls hydropower project and the relocation of the Enmore sugar packaging plant to Albion to make way for an oil-sector related machine shop, the President. ” On the one hand:  we want sustainability and cheaper energy and on the other hand:  the naysayers throw every obstacle at achieving this.  On the one hand: we want a profitable and diversified sugar sector, where our workers are transformed into skilled and semi-skilled functionaries – and on the other hand:  the naysayers “gripe” at every attempt at partnership,” he said.

President Ali indicated that his administration would ignore those who with politically-motivated empty criticisms even as he urged  Guyanese to change the way the way “we think, act, and behave” as the country continues on a path of rapid advancement. “The chronic naysayers will find fault in everything we do. With a positive mindset, however, we will work to strengthen every decision and policy to deliver the best possible outcome for all. Attitude set in misrepresentation, political mischief and destruction—will not take us forward,” he said.

Touching on the energy sector, he  said energy security was not only about Guyana but about the creation of an “energy corridor” , a seeming reference to the Arco Norte natural gas-to-power project involving Suriname, Guyana and Brazil. “Not only should we be thinking about how to catalyse development in Guyana—we should be thinking about how to advance new growth poles and centres, ensuring that every region benefits from the prosperity that is coming,” he said.

Dr. Ali also urged Guyanese to change their attitude to work and comply with health and comply with standards. “To accomplish this requires a completely different attitude. The way we view safety, standards and work ethics must all be addressed in creating the right attitude for a successful future,” he said.

The President’s 10-point plan for a ‘One Guyana’ also included recommendations for Guyanese to be known as people with fundamental principles, and defenders of universal values like freedom, democracy and rule of law, equity and fairness; share common values of love, fairness, transparency, education, health, justice, freedom, equality and respect by ensuring equitable access, fairness and investment,  respect, real decency, and dignity. “We cannot love Guyana or be part of the ‘One Guyana’ family by sowing seeds of division and divisiveness,” he said.  “Those who do not share these values would see racism, divisiveness, and hate as tools to be used for their own selfish gains. We must not fall prey to those pursuing this path. We have had 52 years of experience as a Republic to understand the consequences of such a visionless and destructive path,” he added.

The President also appealed to Guyanese to be objective rather than engage in simplistic propagandistic theorising to arrive at self-serving outcome. “Being objective is being responsible! Objectivity cannot be based on unfounded perceptions, wild accusations, personal vendetta, social or political alignment,” he said.

He used the opportunity to appeal to Guyanese to be patient as government was continuing to deliver its 2020 election campaign promises. “Being realistic is also understanding that the commitments we made in the manifesto are to be achieved within five years, and I assure every Guyanese those commitments we made will be honoured and delivered.”

In the area of governance, he said steps were being taken to reform Guyana’s constitution, and the legislative and judicial arms of the State were being modernised.