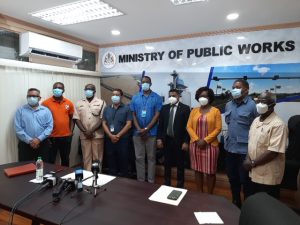 As families await word about the disappearance of three fishermen after a seabob trawler sank off the coast of Mahaicony early Saturday morning, officials on Monday said emergency response was hampered by the late delivery of information to authorities.

“Our understanding is that there was no information passed on to the Lighthouse or MARAD (Maritime Administration) at the time of the incident so it was approximately 24 hours before there was any official knowledge of the incident,” Home Affairs Minister Robeson Benn told reporters. He credited the Guyana Defence Force Coast (GDF) Coast with moving swiftly on receipt of the information.

Director-General of the Maritime Administration, Captain Stephen Thomas said nearby vessels did not receive distress radio messages on the emergency communication channel from the ill-fated trawler, “Worldfriend 307.” Through Public Works Minister II, Deodat Indar, Mr. Thomas said he received information  about the trawler at about 6:45 PM Saturday but officials were informed that Noble House Seafoods received information about 5:30 AM Saturday. Mr. Indar said “we have to find out here why the information was not passed to the regulator or anyy other government agency that deals with these kinds of matters.”

Mr. Benn said the vessel went down about 26 nautical miles from the Mahaica River. He said a Coast Guard team, including divers, were expected to return to the area to locate the wreck and conduct additional searches,

In the wake of Saturday  morning’s incident, government plans to review the Search and Rescue Centre immediately on notification of the incident.

A Board of Inquiry composed of Ms. Yolanda Hughes of Transport and Harbours Department, MARAD’s Captain John Flores (Chairman); former Head of Transport and Harbours Department, Ronald Charles; Coast Guard Lieutenant Rawle Williams, Senior Superintendent Ewart Wray of the Guyana Police Force’s Marine Unit, Ministry of Labour’s Occupational Safety and Health Officer, Dwayne Vyphuis and Chief Fisheries Officer, Denzil Roberts. They have been given 14 days to conduct an investigation stretching from the date of departure of the trawler to the time of the distress call and confirmation that the vessel went down. The Inquiry will also review the competency of the captain and crew, obtain statements from the various agencies and the survivor Winston Dazzell.

The MARAD Director-General explained that all vessels are required to have a card with the distress procedure near to their radio communication sets. Among the things that should be done, he said, is the transmission of an distress message to nearby vessels. “We have so far no records of calls being made from the vessel on that emergency, distress channel,” he said. Concerning the call that was made to Noble House earlier Sunday, he said the company should have informed MARAD/ Lighthouse “right away” “but that wasn’t done in this case” and so responders could not have started closing in on the area.

Pressed on the types of penalties for failing to report a distress immediately , he said there were merely “administrative”.