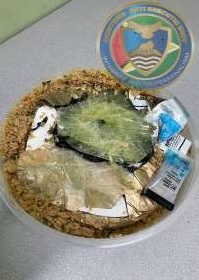 The bowl of fried rice, with cocaine, that CANU said Esmond Anderson was attempting to smuggle to New York.

A  man from Number 5 Village, West Coast Berbice has been arrested after 2.9 kilogrammes of cocaine were found in a bowl of fried rice in a suitcase he was carrying, the Customs Anti-Narcotics Unit (CANU) alleged on Sunday.

CANU said its agents intercepted the narcotic, with a street value of US$84,000.00 (approximately GY$17.2 million), on Friday while 28-year old Esmond Jermaine Anderson was preparing to depart the Cheddi Jagan International Airport aboard a JetBlue flight to New York.

“A search of the passenger’s suitcase was conducted in his presence, which resulted in the discovery of a white substance suspected to be cocaine concealed in a bowl with fried rice, after which CANU officers at the CJIA conducted a field test, which revealed that the substance was cocaine,” CANU said.

Mr. Anderson, who works with one of the leading oil industry support companies, is expected to appear in court on Monday to answer a charge of possession of narcotics for the purpose of trafficking.