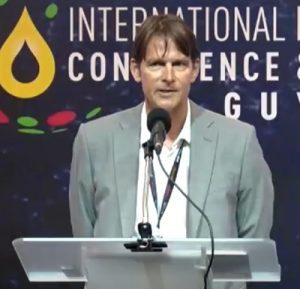 A more than 2o-year-old idea to generate electricity from wind for consumption by Guyanese could this year move to the installation of six turbines at Hope Beach and Chapman’s Grove, East Coast Demerara and their output would be supplemented with solar energy during periods of less wind, an official said.

Project General Manager for the Hope Energy Development Project, Johan Sydow told the International Energy Conference- Guyana that the six wind turbines at the two locations that would supply 25 megawatts of electricity to the Guyana Power and Light (GPL). He explained that the wind-generated electricity would be fed to a substation and then to GPL’s 69 KV transmission line.

When completed, the official said the project is expected to offset 10 percent of GPL’s generation at 2106 figures, reduce fuel imports by 20 million litres and so save Guyana US$11 million annually as well as a 10 percent reduction in pollution from Heavy Fuel Oil amounting to 53,000 tonnes of CO2 annually.

Mr. Sydow said that with the solar power project, the selling price for the electricity is expected to be just over 7 US cents per kilowatt/hour.

The Danish firm, Vestas, is expected to supply the wind turbines to Guyana as part of efforts to open up a new market and would be part of the 15-year operation and maintenance of the turbines. The official said the contract would include the training of three Guyanese and guarantees of performance of the wind turbines.

GPL and Hope Energy Development are expected to sign a 20-year power purchase agreement (PPA) which is under discussion. “Once we have the PPA signed – I’m not putting dates on this because everything hangs on that PPA – once we’ve done with that then the timeline is in our control again,” he said.

Mr. Sydow said studies show that there is less wind during middays but there is sufficient sun to generate 20 megawatts of electricity. “The result of this is a combined project of solar and wind. At 25 megawatts at very high average output… so this is good news, this is much, much better than we had thought that was possible when we had first started,” he said.