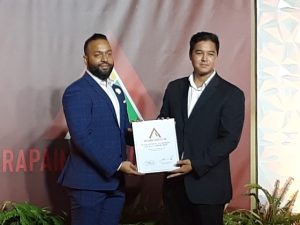 A joint venture logistics company between Roraima Airways and the Trinidad-headquartered RAMPS Logistics have teamed up to form the majority Guyanese-owned Arapaima Logistics which has already sealed a deal to ship 10,000 coconuts to the United States (US), officials said Saturday.

“It is one of our mandates to engage the agriculture sector. And let’s start bringing the agricultural products from Guyana to the Caribbean and into the USA,” said Chief Executive Officer of Arapaima Logistics, Gerald Gouveia Jr. at the launch of the joint venture.

Vice President of Regional Initiatives at RAMPS Logistics, Rudy Rampersad announced that the company’s first task is to ship 10,000 coconuts to the United States.  The intended partnership is an opportunity to allow international supply chain to access local producers and suppliers for those local producers and suppliers to access foreign markets….We currently have 10,000 Coconuts out of packing right now and you pull maroon and that is expected to reach the Georgetown next week that will be exported to the United States,” he said.

President of the Georgetown Chamber of Commerce and Industry, Timothy Tucker welcomed the joint venture as a genuine partnership that is committed to local content with competent Guyanese who have a track record. “We are not here to see we are going to be a shell. We are here for meaningful partnerships and we have seen that. The could they could have simply chosen a random Guyanese and tried to fulfill a local content but it chose a meaningful part in the one that has has the experience and has been tried and tested and we have seen that,” said Mr. Tucker, a known local content campaigner.

Arapaima Logistics Inc and GK Logistics Guyana (Roraima Airways) is believed to be the first such company tp have been formed following the passage of Guyana’s Local Content legislation.  Arapaima Logistics says it will be supporting agro-processors and artists.