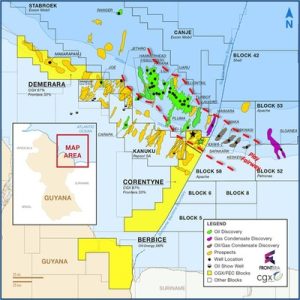 The Canadian company, Frontera, the major partner in the joint venture with CGX Energy, late Wednesday night announced that it would be spending more than US$100 million on the drilling of a second exploration well in the Corentyne Block.

Last year, the company had initially planned to spend US$85-$90 million on exploration at the Kawa-1 well but had later said that cost could have gone up to between U$110-US$125 million by the end of the drilling there.

Speaking hours earlier on Wednesday at the International Energy Conference- Guyana, CGX Chief Executive Officer, Professor Suresh Narine told delegates that the Wei-1 well would be drilled in the second half of 2022. He explained that that well is north-west of Kawa. “Obviously, Kawa having established that there is an active hydrocarbon system and established several more very important parameters for us, we are approaching Wei with a lot of excitement,” he said.

Professor Narine described Kawa and Wei as “complex wells” and the latter would be the second well drilled on the slope and “so it is still in a very challenging environment and so, therefore, we retain the same well and the same drilling team because, again, operating safely is extremely important,” he said.

The CGX official said there was now a “very intensive logging programme” of the Kawa discovery that was confirmed on January 21,  2022.