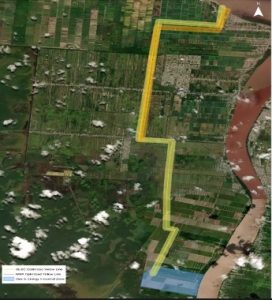 The gas to shore pipeline along the West Bank Demerara to Wales.

The more than US$1 billion gas-to-shore project would not immediately produce ammonia and urea because the amount of available gas would be just sufficient to power the electricity generation plant that would be built at Wales, West Bank Demerara, the Ministry of Natural Resources said.

‘There is no commitment yet from Exxon to bring additional gas at this point in time . We don’t have sufficient gas for the value-added opportunities,” the ministry’s representative, Winston Brassington, told the International Energy Conference being held at the Marriott Hotel.

Vice President Bharrat Jagdeo a day earlier on Tuesday said government was working on a gas strategy but already he said that Guyana wants to use the 16 trillion cubic feet of gas in contrast to the position being taken by joint venturers. “They believe that it’s better to reinject the gas. We’re doing some studies. We ask them to see if we monetize this whether we cannot get more jointly from using the gas than the reinjection but even on its own we’re trying to move this forward,” he said.

Government had initially touted the plant as one that would have readily produced ammonia and urea for use in the agriculture sector, but for now Mr. Brassington said the project would produce a net output of 250 megawatts of electricity as well as 3,700 barrels of natural gas liquids way above the daily consumption of liquid natural gas pegged at 700 barrels per day.

He said ExxonMobil would be providing 50 million cubic feet of “wet gas” down a 12-inch pipeline but when processed that would be reduced to 45 million cubic feet, “barely enough” to power the 300 megawatt electricity plant. “Because, we are looking at a bigger plant, we are building the capacity but at full capacity we will need all of the gas,” he said. He added that the net output would be 250 megawatts of electricity.

ExxonMobil would be financing  the 225 kilometre long pipeline and the Guyana government would be doing so for the power plant, Mr. Brassington said in touting the project as one that will halve the cost of electricity for domestic, commercial and industrial consumption.

Mr. Brassington said the 12-inch pipeline has a capacity for 120 million cubic feet of gas.

In terms of a timeline, the financial analyst said the Environmental Impact Assessment (EIA) report would be submitted by April and that would pave the way for ExxonMobil to start ordering the piping. Final engineering is projected to be done in the third quarter and all of the commercial agreements and Final Investment Decision is to be made by year-end.

Mr. Brassington said, for its part, the state-owned Guyana Power and Light would have to invest in a new transmission and distribution system to operate 230 kilovolts instead of the current 69 kilovolts.

The Natural Resources Ministry representative said the aim is to produce electricity at about 10 US cents per kilowatt hour and increase peak generation capacity to 400 megawatts compared to last year’s peak of 135 megawatts. Mr. Brassington noted that increased demand is linked to improved economic growth .