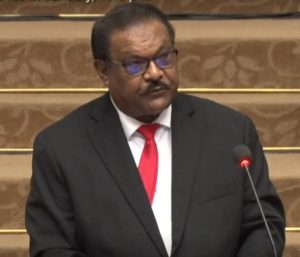 Local Government  Minister Anand Persaud on Monday urged Georgetown Mayor Ubraj Narine to pull the trigger on improving the conditions of City, even as government put local government councils that they need to give value for money.

“I’m calling on the Mayor to end his playing of politics at the Council in Georgetown,” he said, adding that over the years the People’s National Congress/ A Partnership for National Unity Mayors have been undermining the relationship between the municipality and central government.

The Local Government Minister questioned where City Hall’s more than GY$2 billion annual revenue was going especially since central government was assisting Georgetown with road, bridge and drainage works. “They are squandering the residents’ money. The Mayor should not become trigger happy but be focused on pulling the trigger in the Council . Stop procrastinating Mr. Mayor and get the job done,” he said.

Over the years, City Hall has been blocked from generating its own revenue by revaluation of the properties, paid parking, fines for littering and the movement of large vehicles through the streets of Georgetown. 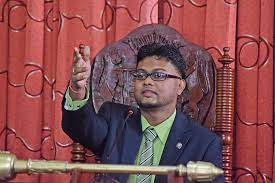 Mr. Persaud told the House, in his contribution to the 2022 National Budget debate , said $714 million have been set aside for grants to local democratic organs. He said government expected the monies to be spent “prudently and transparently.” “They must be accountable for every dollar spent, thereby improving services to our people.”

Minister Persaud said GY$5 billion have been allocated for community infrastructure improvement projects to be launched this  year, and government hoped that the local councils, including Georgetown,  would deliver value for money. “This year we are sending a strong message to all underperforming NDCs (Neighbourbood Democratic Councils), including the Georgetown Mayor and City Council. You either shape up or face the stringent consequences.”

Mr. Persaud indicated that government has grown weary of local councils “playing with our people’s livelihoods at the community level. In that regard, he charged NDCs with ensuring that their environment is kept clean and there is no build-up of solid waste.