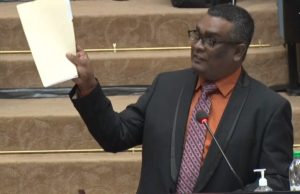 A Partnership for National Unity+Alliance For Change (APNU+AFC) parliamentarian, Ganesh Mahipaul on Monday flayed government’s record on local democracy, highlighting that that there was no reference to local government elections in the 2022 National Budget.

“Was there any mention of local Government Elections in the budget presentation? To my recollection, the answer is a resounding NO! This regime is not focused on upholding and ensuring the holding of local government elections and the only reason is because they are afraid of the APNUAFC coalition,” he told  the House during the first day of debate on the budget.

However, well-placed sources have said that $1.4 billion have been set aside in this year’s budget for the Guyana Elections Commission (GECOM) to hold the local polls in the 10 towns and more than 60 neighbourhood councils.

GECOM’s Chief Election Officer , Vishnu Persaud is on record as saying that he believed that that electoral management authority could prepare for the holding of  local government elections this year. Since then, APNU+AFC and the Working People’s Alliance have laid down the need for fresh house-to-house registration to create a new voters’ list as a precondition for local government elections.

The opposition had previously acknowledged the inability to hold he local polls last year because of the need to resolve issues surrounding  the hiring of a new Chief Election Officer.

On the issue of local democracy, APNU+AFC’s Mahipaul also accused the government of failing to make way for the rotational internal elections by the local councils to elect new Chairmen, Vice Chairmen, Mayors and Deputy Mayors  in accordance with Local Authorities Elections Amendment Act of 2018 by the 16th of December.

“Every year, by law this must happen. Last year it did not happen,” he said.

Mr. Mahipaul laid the blame squarely  at the Attorney General Anil Nandlall and the Ministers of Local Government and Regional Development Nigel Dharamlall and Anand Persaud. ” Sir it is him who I must blame because it is he who must guide or is it just that they do not take guidance Comrade Nandlall? Is it that the Ministers of Local Government and Regional Development intellectually circumcised to the point where they don’t understand your guidance? Or is it you Hon. AG that does not have the testicular fortitude and intellectual aptitude to boldly speak out and speak up at cabinet meetings? Is that how dunce they are?,” he said.