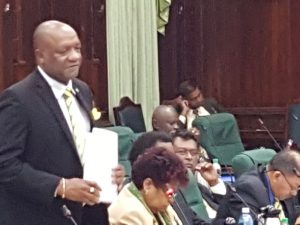 The opposition A Partnership for National Unity+Alliance For Change (APNU+AFC) has asked for time to deliberate about who should emerge as Guyana’s new opposition leader following Mr. Joseph Harmon’s resignation from that post earlier Wednesday.

“The Chief Whip of the APNU+AFC has said that they will indicate to me at a later time their availability for me to convene a meeting for the election of a new opposition leader,” House Speaker Manzoor Nadir told the National Assembly before the presentation of the 2022 National Budget.

Mr. Nadir said the Leader of the Liberty and Justice Party, Lenox Shuman, who is also Deputy Speaker, said he would not be part of the process for the election of a new opposition leader.

The House Speaker said that at 11:40 Wednesday morning, he received Mr. Harmon’s letter of resignation.

His resignation on Wednesday followed his demitting office as General Secretary of APNU.

While Mr. David Granger has resigned as APNU Chairman, he remains the Representative of the List of candidates. People’s National Congress Reform (PNCR) Leader Aubrey Norton was Tuesday elected as APNU Chairman.

Earlier Wednesday, APNU parliamentarian, Roysdale Forde, who had performed the functions of opposition leader in the absence of Mr. Harmon, said he was not aware of any move for him to eventually take over that constitutional office.

The majority of opposition parliamentarians would have to vote for the new nominee.

Mr. Norton had said that his party’s Central Executive Committee had decided that he should emerge as the new opposition leader and Representative of the List.