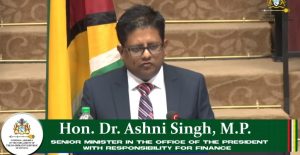 Guyanese who earn $75,000 per month or less will no longer have to pay income tax.

Finance Minister Dr Ashni Singh made the announcement in his 2022 National Budget speech. “In this regard, we are proposing to increase the monthly income tax threshold from $65,000 to $75,000 monthly, thereby releasing a total of $1.3 billion into the hands of current taxpayers both in the public and private sectors,” he said.

He says that in 2021 the increased revenue from personal income tax of $8.2 billion was driven by higher remittances by employers in both the public and private sectors.

The Finance Minister said that the GDP for 2021 is expected to be 19.9 percent, while non-oil GDP is estimated to have grown by 4.6 percent in 2021, despite the persistence of COVID-19 as well as the impact of the floods.

Inflation was 5.7 percent in December 2021, reflecting in higher food prices, which rose by 11.6 percent and contributed 5 percentage points to the inflation rate.

The Guyana government also on Wednesday announced several measures, including the cutting out of middle-men, to reduce the cost of living. In his 2022 budget speech, he said that special markets would be held across the coast.

“In the interest of reducing inefficiencies in this process, we will be arranging monthly farmers markets at locations to be specified in East Berbice, East Coast Demerara, Georgetown, East Bank Demerara, and West Coast Demerara in the first instance, with the possibility of extending to other locations depending on the initial experience. This will help our farmers find ready markets for their produce, and help consumers benefit from the price advantage of buying directly from the farmer,” he said.

Dr. Singh says evidence shows that the cost of basic items are cheaper at farms. “the extent of the upward price movement at the marketplace is not reflected in similar price movement at the farm gate. Indeed, market prices have increased much more steeply that farm gate prices. This, of course, reflects a number of factors, including transportation cost and multiple layers of handling and reselling from farm to final retail,” he said.

In the area of fuel, Dr Singh says government will immediately be lowering the excise tax rate further on gasoline and diesel from 20 percent to 10 percent. No mention was made of cooking gas.

Cost of Living in vulnerable communities
The Finance Minister also announced that billions of dollars would be provided to assist most needed communities after discussions are held. “Given the complexity of the factors driving price increases and the limited policy instruments available to mitigate these increases, we intend to engage in further consultations with the communities most affected both on the coast and in the hinterland on possible interventions to help ease the impact on the most vulnerable in our society. To this end, we have allocated a sum of $5 billion to meet the cost of the interventions to be implemented following these consultations,” the Finance Minister said.

The Finance Minister says public assistance will be increased from $12,000 to $14,000. Eighteen thousand persons are expected to benefit from this year’s increase which will amount to $432 million.

The uniform allowance and the Because We Care cash grant for the more than 200,000 children across Guyana will this year be increased.

Finance Minister Dr. Ashni Singh says that the yearly uniform grant to the parents of each school age child will this year be increased from $4,000 to $5,000 per child.

He also says that the Because We Care Cash Grants to children in the public and private schools will increase from $15,000 to $25,000 per child.

The Finance Minister says this will place an additional amount of $2 billion in the homes of the same 200,150 children attending both public and private schools.

Previous: APNU+AFC asks for time to decide on next opposition leader after Harmon resigns
Next: OPINION: National Budget: from the perspective of the struggling, it is paltry and punishing