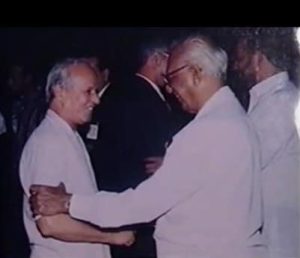 The news that Mr. Yesu Persaud has died, stirred the emotions and triggered the recollections of many. The letter columns and pages of mainstream media reflect praises, condolences and happy moments by persons spent with Yesu.

This is quite understandable for the loss of a man of Mr. Persaud’s stature, short in height, yet with a towering and outstanding contribution to his country and the wider Caribbean.  Much has been said about Mr. Persaud’s contribution to the productive and services sector in Guyana but not so much about his political activism and degree of involvement therein.

My relationship with Yesu goes back a few years before the PPP/C won the election in October 1992. By that time, he was openly involved in domestic politics though he was not known to belong to any political party. Suffice it to say, that though I had never met him personally before, I knew of him making headline news when he fell out with the Hoyte administration over the handling of the Seals and Packaging Industry Limited ( SAPIL) now Caribbean

As the struggle intensified, and as the Hoyte administration began, more and more to alienate professionals at the managerial level at state enterprises, others including Pat Thompson, the then CEO of Guyana Bauxite Company (Guybau), David Yankana as CEO of Guyana State Corporation (Guystac) and the Consultative Association of Guyanese Industry (CAGI) as well as other important members of the business community and functionaries of state enterprises became more vocal in their opposition to the aging rudiments of the Burnham dictatorship.

With the loosening up of the long-reach and dreaded tentacles that characterized the Burnham era, and concomitant with his successor’s staggered and reluctant opening up of a democracy once surrounded by ramparts built with clay, many individuals who considered getting politically involved would be tantamount to committing hari kari, boldly freed themselves of mental slavery and stepped out from their ‘caves.’

At that particular conjuncture of our country’s political history, the time had come for many to stand up and be counted. The political polarization in the country ran so deep it even manifested itself in the religious and cultural life of the country.  In the circumstances, Yesu found himself at the center of an impending controversy that had to be averted in order to save a major event of historic significance that was to be celebrated in Guyana from failing.

Yesu visited Freedom House, headquarters of the PPP on two occasions. First, was to broker an agreement between government and opposition with regard to their respective roles in celebrating the 150th anniversary of East Indian Arrival in Guyana in 1988.

After successfully brokering an agreement, Yesu visited once again to introduce to Dr. Jagan to the Chief Guest, Dr. Shankar Dayal Sharma, the 8th Vice President of India and some members of his delegation who had arrived in Guyana to join in the celebrations.

I recall Dr. Jagan as Party General Secretary briefing members of the executive committee about the difficulties in arriving at an agreement with President Hoyte who felt there was no role for Dr. Jagan nor the PPP save to be an appendage to government’s programme. Yesu was of a different view and saw to it that Dr.Jagan and the PPP played a prominent role during the celebrations. Caught up in the whirlwind of local politics, Yesu stepped forward to play his part in the struggle for the restoration of democracy in Guyana. He recognized the inextricable link between economics and politics; that once workers in field and factory were dissatisfied with with their living conditions in the towns and villages where basic social services were severely lacking, the working people would not be motivated to perform at their level best at their place of work.

It was precisely because of preoccupations of this nature that Yesu Persaud and many others became fed up with the way things were in Guyana. It was therefore no mystery about why and how they got caught up in the realm of domestic politics.  Mounting the political platform as one of the prominent speaker at Guyanese Action for Reform and Democracy (GUARD) rallies, Yesu signaled his support for other members of civil society and the business community who had come out in demanding free and fair elections. This catapulted him to the forefront of the struggle for political change in Guyana.

When differences emerged within GUARD with respect to the choice for a Consensus Candidate to face the election in 1990, Yesu disassociated himself from the internal wrangling and supported Jagan for president and Sam Hinds as the prime ministerial candidate.  Yesu together with a small team skillfully negotiated with others who had expressed reservations but could not offer an acceptable alternative to the Jagan/Hinds combination.  When the cynics and and critics introduced race, ideology and historical antecedents to oppose what was clearly a winning ticket, Yesu pressed on and at a historic meeting held with key players at the then Park Hotel, all hands in a show of unanimity were raised in favour of the Jagan/Hinds ticket.

Promotion at home and abroad of the agreed combination took on a momentous character with Yesu as one of the standard bearers of what was soon to become the dawn of a new era.  With the PPP/C’s victory in October of 1992 Yesu continued to play a supportive role for the new Jagan administration.

It was Yesu who encouraged President Jagan to visit Malaysia and Singapore in 1994. He accompanied President Jagan at some CARICOM Heads of Government conferences to lobby support for the Caribbean rum industry and to press Caricom Heads to support key demands of the West Indies Rum & Spirits Producers Association (WIRSPA).

Yesu distanced himself from unfounded allegations about the role of the private sector in advancing the development of the national economy under the Jagan administration.

In a ‘Caribbean Voice’ article published in 1994, headlined ‘PPP’s Second Year in Government,’ Mr. Persaud pointed out; ‘One of the healthiest and most salutary trends in all of this is that local entrepreneurs are now investing in the country.’  A concrete example of local entrepreneurship investment, was demonstrated with the launch of Demerara Bank in 1994. Giving the keynote address for the occasion President Jagan declared; “My congratulations must go also to Mr. Yesu Persaud, a dynamic businessman who has a knack of turning into gold everything he puts his hands on.”

He was strongly in favour of constitutional reform and made it a constant topic for his programme. Yesu Persaud and Cheddi Jagan were very close friends, one a consummate businessman, the other a consummate politician. They shared common views albeit from different perspectives, on issues such as national democracy, pathways to economic and social development as well as ways and means of tackling global poverty and underdevelopment.
Both giants have gone, one before the other, but the challenges they once discussed and confronted in their interdependent yet interrelated roles remain, albeit in new, complex and challenging times.
Mr. Clement Rohee is an executive member of Guyana’s People’s Progressive Party and had served as Minister of Foreign Affairs, and Minister of Home Affairs.

2022-01-22
Denis Chabrol
Previous: Engineer jailed, fined for ganja trafficking aboard vessel; two others on remand
Next: OPINION: I call on Mr. Granger-let there be some leadership pride, honor too