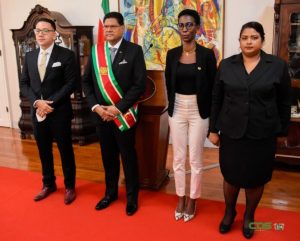 Suriname has appointed a new Ambassador to Guyana and she is Ms. Liselle Blankendal who has been working at the Surinamese Embassy in Georgetown.

She took the oath of office before President Chandrikapersad Santokhi on Tuesday. The Surinamese leader  outlined the priorities for relations with Guyana.

“The policy priorities with Guyana are contained in the founding document of the Strategic Dialogue and Cooperation platform. Suriname and Guyana must act together as future oil states to make the most of this resource and tap markets to increase their production levels,” he was quoted as saying.

Ms Blankendal was First Secretary at Suriname’s Embassy in Guyana.

Ms. Blankendal’s  appointment comes ahead of key talks among the Presidents of Guyana, Suriname and Brazil to be held in Paramaribo, the Surinamese capital, on Thursday.

President Irfaan Ali’s office said, “the leaders are expected to discuss the formation of an energy corridor, oil and gas and other natural resources opportunities, among areas of common interest.”

The other  Surinamese Ambassadors  who were sworn in were  Angeladebie Ramkisoen who will serve in the Brazil, and Gilbert van Lierop in the Kingdom of Belgium.

President Santokhi said, “for the relationship with Brazil, the priority actions are entering into strategic alliances in the fields of oil and gas processing, electricity, market expansion, capacity building, the processing industry and a joint approach to cross-border crime. “