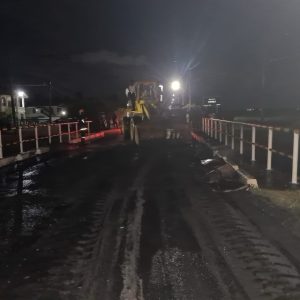 Police early Wednesday morning cleared the bridge at Dartmouth Public Road, Essequibo Coast of debris a day after protesters blocked the thoroughfare to protest the decision to charge a policeman with manslaughter of businessman Orin Boston.

Police and fire fighters cleared the bridge at about 3:30 AM during a pre-dawn operation  in which about 20 protesters scampered away as firefighters and law enforcers moved in.

The Guyana Police Force continued to maintain a presence at the bridge where vehicles were blocked from passing along the lone east-west corridor on the Essequibo Coast. Trucks packed with tons of agricultural produce that were destined for Georgetown were among those that could not pass all of Tuesday, raising fears of a repeat of spoilage and losses that farmers incurred on September 15 when Boston was gunned down.

“A lot of the produce that come from the Pomeroon and come from the Essequibo Coast are being transported by hundreds of tons to the citizens in Georgetown- Bourda Market, Stabroek Market and by extension once the produce goes to Georgetown, that is what is supplying across the country,” the acting President of the Essequibo Chamber of Commerce, Vishnu Balram Suknandan told Demerara Waves Online/ News-Talk Radio Guyana 103.1  FM.

Boston’s father, Orin Boston Snr; speaking from the protest line on Tuesday, expressed grave disappointment with the manslaughter charge that was last week instituted on constable Sherwin Peters because of the circumstances of the shooting death of his son. “That is bluntly unfair because you cannot go into a man’s house, shoot a man in his bed and then at the moment you call it a manslaughter. That’s murder and that’s the reason that makes I’m out here,” he told Demerara Waves Online/ News-Talk Radio Guyana 103.1  FM.

While there were claims that students travelling from Pomeroon and other areas west of the Dartmouth Bridge were not allowed to pass to go to school in the town of Anna Regina, Mr. Boston Snr. said commuters were allowed to exit vehicles, cross the bridge on foot and board other vehicles to continue on their onward journey.

Orin Boston’s wife had said the members of the Special Weapons and Tactics (SWAT) unit barged into her home and shot her husband while they had been in bed. Police had said hours after the incident that they had went in search of prohibited items but had never said what were those.