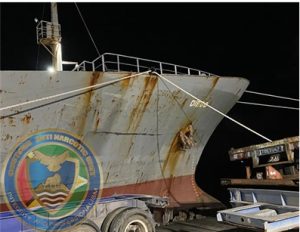 A quantity of marijuana was Wednesday found aboard a Panama-registered cement carrier cargo vessel, and so far the captain and other officers have been detained for investigations, the Customs Anti-Narcotics Unit said.

CANU said that several parcels of  marijuana – a foreign type known as ” creepy “- with a total weight of 16.046 kilogrammes (36 pounds), with a local street value of GY$14 million (US$68,293.00) were found “throughout” the vessel. “If this narcotic had reached its intended destination, its street value would have been much higher,” CANU said.

Head of CANU, James Singh said that of the 19 foreign nationals, the “main suspects” who are the captain, engineer and other senior officers have been detained. The others remain aboard the vessel that is moored at the Guyana National Industrial Corporation’s wharf, Lombard Street, Georgetown. 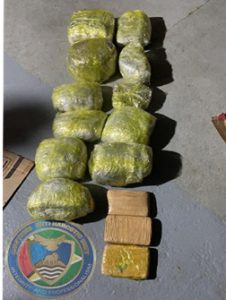 The packets of marijuana that CANU said was found aboard the MV Diego.

The captain is Panamanian and the crew members are from Cuba and Honduras, Mr. Singh said.

CANU said officers from the Special Operations section conducted a search on a vessel that was scheduled to leave Port Georgetown later Wednesday morning with a quantity of cement.

CANU said that operation was part of an ongoing multi-agency and multi-national investigation aimed at dismantling a regional network involved in the movement of narcotics from Guyana using cargo vessels.