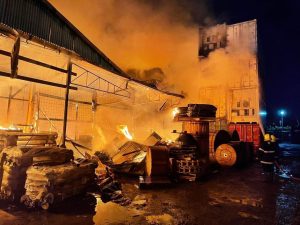 “In this particular instance the facility did not have any means of fire prevention.

There were no smoke detectors, fire extinguishers or fire hoses installed in the building,” the Fire Service said.

The cause of the fire was not immediately known but the fire service said both Shipping companies incurred huge losses.

The Guyana Fire Service said it received a call at 11:37 Sunday about the fire at the two storey wooden, concrete and steel building owned by Guyana National Industrial Company and used by shipping companies, namely Tropical Shipping Company and Laparkan Trading Company.

Eleven vehicles were also destroyed while five were severely damaged and three others were slightly damaged.

The fire tenders and fire boat  brought he fire under control and subsequently extinguish it.

The Fire Service reminded that smoke detectors and sprinkler systems play a major role in preventing fires, while fire extinguishers are useful in putting out small fires.