House Speaker says opposition parliamentarians involved in removal of mace will be punished; Harmon says action will be taken against passage of Bill 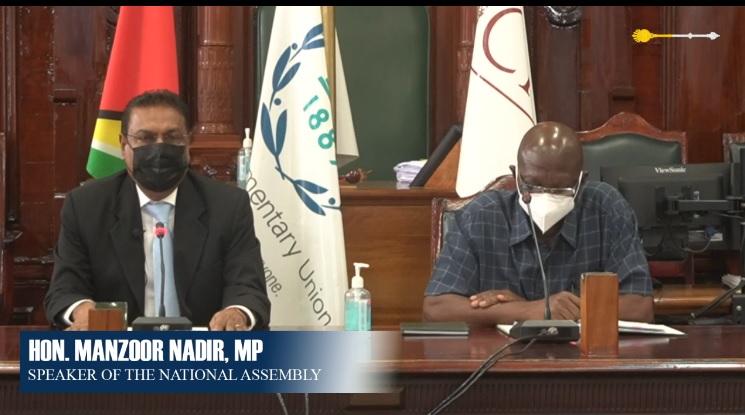 House Speaker Manzoor Nadir says the opposition parliamentarians, who removed the mace during Wednesday’s debate on the Natural Resource Fund legislation, will be punished.

He declines to name the parliamentarian who spearheaded the removal of  the mace, only saying that the video recordings show who participated in what he termed the “terrorist” behaviour

Mr. Nadir said after the mace was “violently removed” by opposition lawmakers, a “replica mace” was placed before the House Speaker. He said the second mace was set aside in case the original mace could not be found.

Opposition Leader  Joseph Harmon on Thursday fully endorsed all of the actions taken yesterday by APNU+AFC legislators and restated that the government version of the Fund legislation was not passed. He said legal action would be taken to confirm that the 2019 version of the sovereign wealth fund law was still in force. “I am in full support of the actions taken by opposition Members of Parliament in attempting to halt the passage of
the Natural Resource Fund Bill….We have already established that the passage of the bill was illegal and
we will soon take the necessary action to deal with this issue,” he said. 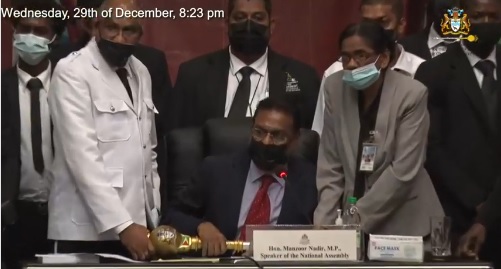 The replica mace before the Speaker Manzoor Nadir before Governance Minister Gail Teixeira put the question for the National Resource Fund Bill to be read a third time.

The House Speaker dismissed opposition A Partnership for National Unity+Alliance For Change (APNU+AFC) claims that the mace was not in front of him and that the government parliamentarians were still standing while he put the Natural Resource Fund Bill was put to the vote. “Let it be pellucid that the two ingredients necessary for the lawful passage of Bills, Motions in the National Assembly were present. The mace was in place and the vote was taken while the members were in their seats; the majority of members were in their seats,” he said.

The House Speaker thanked parliamentary staff member, Eamon  McPherson on behalf of a “grateful nation” for securing the mace while he was being taunted and racial slurs that were levelled against him.

Asked whether he  did not seek to meet with the opposition parliamentarians during the brief suspension of the sitting, he said Opposition Chief Whip Christopher Jones did not respond to calls. “The calls went unanswered,” he said.

Mr. Harmon vowed that the opposition would not allow a Natural Resource Fund law that would allow “thievery” of the nation’s resources. His People’s National Congress Reform (PNCR), and several civil society organisations have chastised the government for denuding the Natural Resource Fund law of broad-based oversight, the presidential appointment of Board of Directors to manage the fund, and  the change in the formula for withdrawing monies from the Fund.