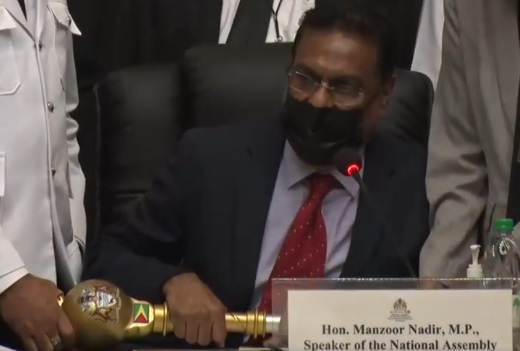 House Speaker Manzoor Nadir holding what he termed a replica mace while putting the Natural Resource Fund Bill to the vote while the traditional mace was taken away by a number of opposition parliamentarians.

Opposition Leader Joseph Harmon on Thursday rejected House Speaker Manzoor Nadir’s claim that a replica mace used during a simple majority vote in favour of the Natural Resource Fund was an authentic standby symbol of authority.

“The Speaker’s statement that Guyana has two Maces is appalling and simply untrue. The replica referred to by the Speaker is a miniature Mace which was made for the hosting of Guyana’s National Youth Parliament and holds no authority in the sitting of the National Assembly. Further there is no rule that provides for the use of a replica Mace in the National Assembly as being touted by the Speaker,” he said.

Asked to respond to Mr. Harmon’s statement, Mr. Nadir said “the Leader of the Opposition is entitled to his opinion.”

Minister of Governance, Gail Teixeira, at a news conference, challenged the Opposition Leader to take the matter to the Court and she expressed confidence that the judiciary had no role in telling the legislature how to conduct its business. “A Bill has been passed. Mr. Harmon has some choices: He can go to the court. The judiciary will most likely say that is a Parliament matter. Go back to the Constitution. The Constitution deals with how Parliament regulates itself; the Parliament regulates itself, not the judiciary, not the Executive,” she said, add that the High Court had previously ruled that it had no role. However, she said that Mr. Harmon could table a private members Bill to amend the wealth fund law that was passed Wednesday night.

Earlier Thursday, the Speaker of the National Assembly told a news briefing that while the mace, which was grabbed and taken outside the Chamber by opposition parliamentarians, an exact replica of the mace that had been made to cater for certain situations was used Wednesday night when the Governance Minister asked him to put the controversial wealth fund bill to a vote. “We have two maces also and since my ascension, we looked at many possible occurrences and one was to have another mace in the event the traditional mace could not be found to put in place; whenever Parliament sits we have another mace,” he said. Mr. Nadir, who had served for many years as a Parliamentarian and a government minister, said the smaller mace that was used on Wednesday during the uproar is an “exact replica” of the mace that was presented to Guyana  by the United Kingdom’s House of Commons when Guyana became independent in 1966.

The Opposition Leader, in fully endorsing the actions taken by his A Partnership for National Unity+Alliance For Change (APNU+AFC) parliamentarians to block passage of the wealth fund law, also backed his colleagues’ position that the passage of the legislation was null and void because the mace was not in the House.

“The speaker cannot simply decide to pick up something and replace the official Mace of the National Assembly when the rules clearly state that if the Mace is not in the house absolutely no business can be done, again I say there is no provision for use of a replica or substitute Mace,” said Mr. Harmon, an Attorney-at-Law by profession.

The Speaker of the National Assembly said the wealth fund law was legally passed because the majority of the government ministers were in  their seats and that the mace was present in the House.

But the Opposition Leader and the Opposition Chief Whip , Christopher Jones rubbished Mr. Nadir’s claim that he had made several calls to Mr. Jones during the suspension in an effort to meet with him. Mr. Harmon strongly suggested that Mr. Nadir was biased in favour of the governing People’s Progressive Party (PPP). “Let it be known that no attempt was made after the suspension of the sitting to have dialogue with the Chief Whip on the opposition side. In fact the Speaker went and met with members on the Government side and crafted their plan to come back into the house and force the passage of the bill,” he said.

The rules governing the Parliament make no reference to a mace, but the website says that the mace is the “the most significant symbol in the National Assembly. It represents the authority of Parliament.”

The Speaker has vowed that “repercussions” would meted out to the parliamentarians who snatched the mace from in front of him during the sitting.  He has not identified any of the lawmakers of said how they would be punished.

2021-12-30
Denis Chabrol
Previous: House Speaker says opposition parliamentarians involved in removal of mace will be punished; Harmon says action will be taken against passage of Bill
Next: Churches, bars, restaurants can open until 12:45 AM/ 00:45 hours on Jan 1- COVID Task Force