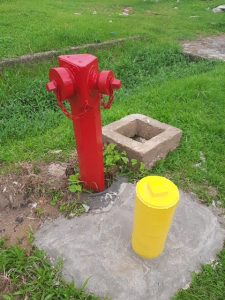 Home Affairs Minister Robeson Benn says that hundreds of fire hydrants in Georgetown and other areas of Guyana are being repaired and in some cases replaced.

“Fire hydrants are being repaired now,” he told the National Assembly’s Committee of Supply as he sought approval for for $40 million to fund the repairs. Mr. Benn detailed that 50 have already been repaired, with those connected to the priority lines in Georgetown.

The Home Affairs Minister said 655 hydrants have been identified for repairs of which 132 are priority hydrants; 195 are slated for minor repairs and 100 for major repairs and 32 are to be replaced.

Among the works being done is the securing of the valves in a PVC case to ensure that firefighters can access them easily during fires instead of being obstructed by dirt or garbage.

He says fire hydrants will also be installed in new housing areas. “In some of the new housing areas, along with the Ministry of Housing and Water, we’re working on an effort to put hydrants in,” he said. The areas identified are Diamond, Eccles, Parika and Vreed-en-Hoop.

The government last month ordered that the Guyana Fire Service is responsible for the maintenance and repairs to fire hydrants.

For several decades, there had been confusion over whether the Guyana Water Incorporated or the Fire Service or the had been responsible for fire hydrants.