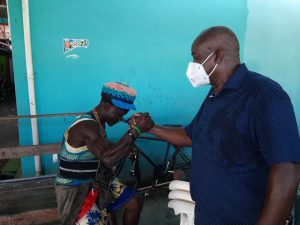 He told Demerara Waves Online News/ News-Talk Radio Guyana 103. 1 FM that as part of his party mass organisation campaign, persons would be assigned to secure support in both Indigenous communities and Indo-Guyanese communities.

Saying that “we have a clear message for them,”  the PNCR Leader said most Indo-Guyanese complain that they are being disadvantaged and so one of his planks is to stress that Guyana is a  multi-ethnic society where unity should be fostered. 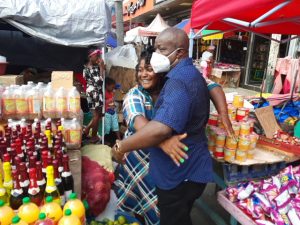 He said the PPP tended to instill fear in Indo-Guyanese communities when the PNCR campaigns there, but he cautioned that the governing party against doing so. “I want to, at this point, warn them against that because we will visit all communities and expect to campaign freely without any threats whatsoever  as they can do in our strongholds,” he said shortly after a Christmas Eve walkabout in Georgetown’s central business district of Water Street, East Coast Bus Parks and Stabroek Market area.

He was warmly greeted by vendors and passersby alike, many of whom expressed hope that he would deliver on his promise to revive the PNCR and represent them. “Dat is we boy Norton. Is you we want… We out yuh in deh and we want yuh wuk fuh we. We ain’t put yuh in deh fuh yuh du no stupidness. We put yuh in deh fuh wok. We ready fuh wok wid yuh tuh. We want man who could fight fuh we,” a vendor said. Another woman challenged the PNCR Leader “to do something fuh we when we put d ‘X'”.  Another vendor, saying that she is a diehard PPP supporter, would be willing to give Mr. Norton her vote if he you “seek God.” “I’m a born and dead PPP but if you do the right thing I will vote for you,” she said. 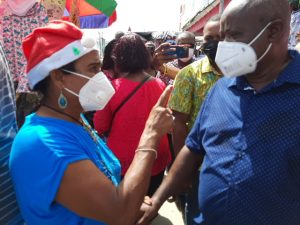 Speaking at his inauguration as the fifth PNCR Leader, he said the party would have to decide whether to ask its parliamentarians to contribute a percentage of their salaries to a fund to execute party work as had been done decades ago. At the same time, he hoped that party faithful would volunteer contributions to the work of their political organisation to achieve some of his stated goals including making the PNCR a permanent election machinery. “I believe leadership should motivate party comrades to the point where they want to contribute. I don’t necessarily want to go down a mandatory road but if the party executive decides that, I will acquiesce to their request but for me, we need to influence our people, motivate them and cause them to want to contribute,” he said.

The PNCR Leader said his party would be relying on the 40-member executive and elected officials at regional and local levels across Guyana to fan out in their communities to convince them to support his party.