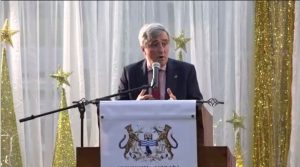 The European Union (EU) on Wednesday raised concerns about the pitfalls of borrowing from China to finance and build major infrastructural projects.

Deputy Managing Director for Americas, European External Action Service Mr Javier Niño Pérez, during a question and answer session at the University of Guyana, disagreed with those who say that China offers better conditions. He said China would not invest or trade with countries and create a greater understanding of each other. “The Chinese project is not as much as building something together as much as it is about seizing space, trade links, trade benefits infrastructure projects. This is one element that we have to keep in mind,” he said.

Mr. Niño Pérez recalled that China had invested “heavily” in a 600-kilometre motorway in Montenegro but when that country could not repay the loan, the 10-year old contract had provided for China to seize parts of the country physically. “There is a lot of reading between the lines that one needs to do when understanding and when assessing the Chinese investment,” he said.

Unlike the EU that provides grants, he said China mostly provides loans that need to be repaid economically, politically or in terms of infrastructure

The Deputy Managing Director for Americas, European External Action Service said that while China and the EU cooperate and discuss many areas including climate change, trade disputes, digital agenda, and investing in infrastructural projects, they were “systemic rivals” in the way they regard democracy, human rights, democratic freedoms, rule of law, good governance, the rights of minorities, religious rights, and gender sights.

“We are rivals because, at the end of the day, the EU are going to define a societal model that will persist for the next few decades…This is an issue where China is clearly a rival,” he said.

Latin America Research Professor with the U.S. Army War College Strategic Studies Institute, Evan Ellis earlier this month said in an analysis titled “Chinese Engagement in Guyana: An Update” that the United States should not attempt to block Guyana or other Latin American nations from doing business with China. Instead, Professor Ellis advised the US to insist on transparency, the rule of law, and competent government institutions that can make well-informed and equitable decisions in awarding contracts, approving acquisitions, and enforcing labor, environmental, and other laws for all firms operating in the country.

He said alternatives to Western sources of investment are desirable, insofar as the country is currently benefitting from a petroleum-fueled economic boom. Professor Ellis recommended the U.S. Development Finance Corporation is a logical tool to channel U.S. investment toward Guyana, if the focus of Guyana’s current opportunities in the petroleum sector does not conflict with the desire of the current U.S. administration to focus on “green” projects.

US Congressman Mark Green has told the House Foreign Relations Committee’s subcommittee on Western Hemispheric Affairs that he is working on a law to make American businesses relocate from China. “I’m working on a Bill that will prioritise moving critical parts of our supply chain out of China and back to the Western Hemisphere among our allies and partners. Not only will this Bill help confront the rise of China in the region but will also increase economic opportunities and reduce some of the push factors leading to illegal migration. It’s a win for the United States and it’s a win for Latin America,” he has said.

Guyana is a signatory to the China Belt and Road Initiative through which that Asian country had hoped to build the Lethem-Linden road or a rail. That idea seems to have since fallen by the wayside.