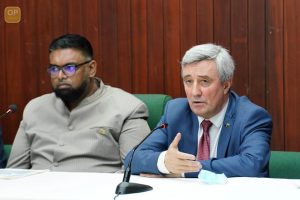 He said the decision to provide the additional cash to Guyana is because the country has managed the 30 million Euro disbursement that has seen at almost 10 kilometres of sea defence being rehabilitated, the maintenance of another 60 kilometres and the planting of six new mangrove sites.

“The release of this budget support is, first of all I think, a proof of trust so we are saying is that we have a true partnership and we trust Guyana to manage this money that will go directly to the treasury of Guyana and it also means that you have provided proof of good management of the finances and the proof of realisation of the works that we are paying for today,” he said during a joint news conference with President Irfaan Ali.

The EU official also praised the Guyana government for ensuring that there is a 30-percent increase in the representation by women on the Sea Defence Board. Mr. Pérez highlighted that the mangroves are not only a good sea defence mechanism but they also help to clean the air.

President Irfaan Ali said discussions between the EU and the Guyana government on new project programming are “ongoing” and “promising”. He said the high-level EU delegation’s visit to Guyana was aimed at defining a strategic way forward, emerging challenges and opportunities as part of the development of a framework.