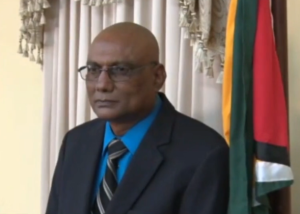 “Nobody has to have any worry about my neutrality or that I may deviate from the path of what is lawful and proper,” he told reporters shortly after taking the oath of office before the Chief Justice, Roxane George-Wiltshire.

He also said that “one year’s time is more than enough to prepare for and hold” local government elections (LGE), but at the same time he said he would have to study matters related to the creation of a credible voters’ list. “Whatever I advocate in terms of list registration and list preparation to the Commission would have to be based on what the laws provide for. As it is now, there seems to be some conflict between laws pertaining to house to house registration and continuous registration so that is something I would have to look at more in-depth before I advise the Commission,” he said.

The opposition A Partnership for National Unity+Alliance For Change (APNU+AFC) continues to be adamant that a fresh voters’ list must be created by house-to-house registration before the next elections are held.

Reflecting on when his application for the post of Deputy Chief Election Officer had been turned down by the Election Commission, he said, “I did not allow that to beat me down in any way.” “I have not taken this appointment bringing any of those stuff with me. I hold no grudge, I hold no malice and I welcome the opportunity to return to GECOM and carry out duties in the best interest of all concerned,” he added.

During his absence from the election machinery, Mr. Persaud said that he had kept himself updated with election matters and also educated himself.

The Chief Election Officer said he now plans to ascertain what is required by GECOM’s departments as part of his overall planning and on other matters like registration and the preparation for elections, he would have to be “guided by the Commission.”

He said he has not examined the electoral reforms that have been proposed by the Guyana government.