GY$25 million worth of marijuana seized 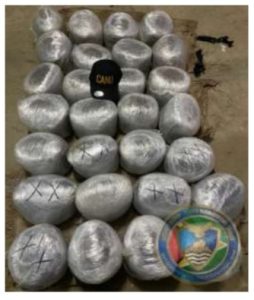 The Customs Anti-Narcotics Unit (CANU) has seized 80 kilogrammes or 176 pounds of marijuana with a street value of over GY$25,000,000 in Corentyne, Berbice, the agency said Sunday.

According to CANU, its agents were on an operation on December 9 to 10 between the Sandaka pump station, Skeldon and Goat Dam area of the village of Line Path, Corentyne, Berbice. “The aim of these operations were to identify routes used for transporting narcotics,” the Ministry of Home Affairs said.

CANU said that on the evening of December 10 while on patrol along a dam in the Line Path area, its officers noticed several people in one of the cane fields adjacent to the dam. “The officers identified themselves and made attempts to apprehend the persons, but they immediately fled in several directions and made good their escape,” the agency said.

The officers reportedly said they combed the area where the persons were seen and discovered four brown salt bags containing 28 parcels cannabis wrapped in transparent plastic. The cannabis parcels were transported to the CANU headquarters. Investigations are ongoing.