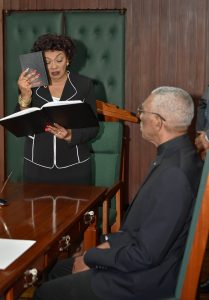 President David Granger administered the Oath of Office to Justice Claudette Singh, SC, CCH. She was sworn-in as the new Chairman of the Elections Commission. In this file photo, Justice Singh takes the Oath of Office at the Ministry of the Presidency.

“The Chairman of GECOM yet again shifted the goal post and changed the rules of the game to suit the People’s Progressive Party,” Mr. Harmon said in a video release to the media.

Pro-opposition Elections  Commissioner Vincent Alexander also added that picking Mr. Persaud could not be properly justified by the Chairman. “Culmination of a flawed process. The chair’s slip is showing. How could Surujbally testimonial be a major plank of her basis,” Mr. Alexander told Demerara Waves Online News.

But Mr. Harmon strongly suggested that the incumbent GECOM Chairman could not be trusted. “The Chairman of GECOM has shown that she cannot be impartial and is willing to continue to use her position to further place the entire GECOM into a tenuous position,” he said.

He signaled that the opposition A Partnership for National Unity+Alliance For Change (APNU+AFC) could soon be agitating against the GECOM Chairman who had been picked by then President David Granger after a Caribbean Court of Justice (CCJ) ruling. “Guyanese confidence in GECOM has been struck another blow by this political decision by the Chairman of the Elections Commission,” he said.

Expressing strong disapproval of Justice Singh’s “actions” in the appointment of Mr. Singh, the Opposition Leader said that the new Chief Election Officer would be held accountable to the highest standards of professionalism. “In the circumstance, we wish to put on notice that Mr. Persaud, in the performance of his duties,  will be held to the standards of fairness, non-partisan, unbiased and transparent decision making. That will be the standard by which he would be judged by us,” he said.

GECOM, in a statement issued hours after the majority decision to pick Mr. Persaud over Mr. Harrow, attributed to Chairman Singh the major reasons for picking the Guyanese over the Jamaican applicant. Those included institutional knowledge of the elections management body during his 17-year stint. “Justice Singh posited that Mr. Persaud is knowledgeable not only with the understanding and management of the work of the CEO’s office and the operational functions of the Secretariat but also with the geography of Guyana’s 10 administrative Regions. Owing to the reasons highlighted, Justice Singh noted that she has no hesitation in endorsing Mr. Persaud’s appointment since he has the necessary skills, experience, and expertise that makes him eminently qualified to
handle the job,” GECOM said.

But Mr. Harmon  claimed that Mr. Persaud does not have the relevant qualifications and competence.

In the aftermath of the March 2020 general elections and the subsequent recount, Mr. Keith Lowenfield and Ms. Myers’ contracts had been terminated. They, then Region Four Returning Officer Clairmont Mingo, other GECOM officials and two members of the People’s National Congress Reform have since been charged with fraud connected to the elections.  The prosecution has already disclosed boxes of evidence – statements of poll and statements of recount- in preparation for the trial scheduled to  start early next year.