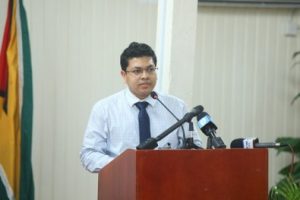 The Guyana government cannot afford a 20 percent wage and salary increase because the public sector wage bill is already high and any such pay hike will reduce the purchasing power of more dollars in hand, a banking and finance analyst said.

He argued that the 7 percent wage and salary increase retroactive to January 1, 2020 is decent because of, among other reasons, it was above inflation at mid-year of 5.6 percent. “The total employment cost for public servants is within the highest range that can be fiscally permitted relative to the State’s current revenue,” said Mr. Joel Bhagwandin.

“Even if, in the current situation, provided that all things being equal, the 20% wage increase for public servants could potentially result in 25% inflation which will have effectively diminish the purchasing power of the currency by 25%. In a different perspective, the 20% increase would not have been a sensible fiscal policy decision in the long run, if it potentially takes away 25% of the purchasing power of the currency,” said Mr. Bhagwandin in his December 4, 2021 “A Contextual Analysis of the Public Sector Wage Increase”.

He further explained that the only way that a 20 percent increase in wages and salaries would not affect the purchasing power would be if it is saved rather than spent on consumption or invested in entrepreneurial ventures which would also result in expenditure on consumption.

Mr. Bhagwandin also disagrees with a 20 percent increase in wages and salaries because major companies and countries cannot continue paying 50 percent or more of its revenue in employment costs.  The call for a 20% increase cannot be accommodated simply because total employment cost of above 30% and in this case above 50% is not financially and fiscally sustainable, even in the richest countries in the world,” said Mr. Bhagwandin, a University of Guyana lecturer in economics.

With 90 percent of government’s current revenue coming from taxes, the Banking and Finance expert reasoned that it is only if  Guyana’s private sector becomes more competitive, attracts foreign direct investment and stimulates and enables the the business environment and pays more taxes then there would be sufficient funds.

Mr. Bhagwandin disagreed with those who argue that Guyana’s oil revenues, amounting so far to more that U$500 million, could be used to pay higher wages and salaries. Highlighting that oil prices are volatile and there is a global campaign to shift to renewable energy, he said the money should be spent on improving physical and social infrastructure for the long-term development of Guyana.