The Guyana Power and Light (GPL) and the Chinese business community have transformed Main Street  Avenue into a nighttime kaleidoscope of colours for the Christmas Season.

Chief Executive Officer of GPL, Bharat Dindyal told Demerara Waves Online News/ News-Talk Radio Guyana that the Chinese Association of Guyana and Main Street occupants have contributed to the beautification and illumination of the Avenue.

“They along with Main Street occupants. We provided the specialized trucks and Techs. That would be done and the grass cut. It will be attractive and family friendly,” he said. 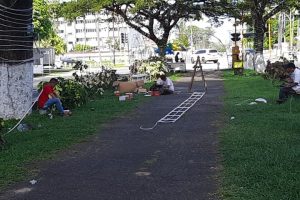 GPL’s Technicians, equipped with specialised trucks, have for almost two weeks now been climbing the trees and wrapping the illuminated LED strips. Other decorative lights have also been installed on shorter trees along the Avenue, one of Georgetown’s main pedestrian thoroughfares.

The installation of the lights has been done under the watchful eyes of several Chinese. 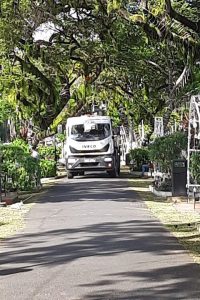 With the garbage bins along the avenue already overflowing, efforts are underway to ensure that that food boxes left by workers and boxes and reels from the lighting apparatus are all removed and the grass is cut.

In  addition to newly-weds taking  pictures on Main Street on Saturday, the lights have already served as a source of attraction to many other persons who turned out to either sit or walk along the avenue.