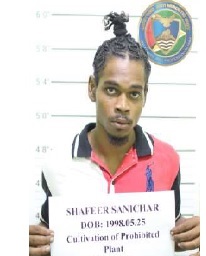 Shafeer Sanichar who was allegedly processing marijuana on a cultivation at St. Cuthbert’s Mission.

A man was arrested at a marijuana cultivation at St Cuthbert’s Mission, Linden-Soesdyke Highway while he was processing marijuana plants at one of the fields, the Customs Anti-Narcotics Unit (CANU) alleged on Saturday.

That anti-drug agency identified the man as 23-year old Shafeer Sanichar, and alleged that he was under a makeshift tent.

According to CANU, its officers discovered about 3,000 marijuana plants ranging from 3 to 6 feet in height on 2.5 acres of land. The agency said it also found processed cannabis and a quantity of  seeds.

“CANU continues to conduct their operations around the country aimed at dismantling the networks that are engaged in the sale as well as distribution of narcotics,”  the agency said.

Meanwhile, the Guyana Police Force said that on Friday it destroyed GY$37,590,000 worth of marijuana at Fort Nassau, Berbice River. 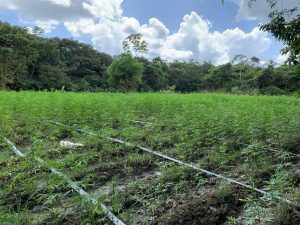 A section of the marijuana cultivation at Fort Nassau.