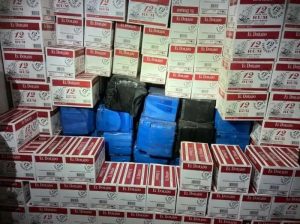 Demerara Distillers Limited (DDL) on Saturday night called for tighter security of transshipped exports, even as it remained confident that about 1, 000 pounds of cocaine were not placed in the shipping container of rum before it left Guyana.

The Guyana Revenue Authority and the Customs Anti-Narcotics Unit (CANU) have also both said that hard evidence shows that nothing illegal was placed in the shipping container in Guyana.

DDL lamented that the cocaine bust by workers at its bonded warehouse in Rotterdam, The Netherlands makes it tougher for Guyana’s exports especially those that are transshipped. “DDL is concerned that international shipping routes which necessitate transshipment through certain other countries now present a growing lack of confidence in transshipment arrangements”, the company said, adding that it “hopes that more effective security and detection measures would be implemented so as to prevent contamination of shipments that threaten the credibility of
reputable companies and their products which earn significant foreign exchange for the nation.”

The Head of  CANU, James Singh told Demerara Waves Online News that the seals on the shipping container were “counterfeit” , but a DDL spokesman has said that “the seals were on intact when the container arrived at the warehouse.” The company spokesman said the seals were the same that they left Guyana with.

The major Guyanese and international rum producer-exporter said it is convinced that the the various checks and balances executed in Guyana, including its own security mechanisms employed during the stuffing of containers with its product at its Diamond plant, would have detected any illegal substances.

DDL said it has always been and remains committed to ensuring that its reputable image and that of  its internationally acclaimed Demerara brands of rum, which only recently won Geographic Indication (GI) recognition in Europe, is never compromised. “DDL is therefore disappointed with the contamination of a recent shipment of its product to the Netherlands.”

DDL credited its rigid commitment to protection of its unblemished image and that of its supply chain and  its products is demonstrated in the fact that the recent discovery of the contamination of its container was made by staff of its contracted bonded warehouse who immediately called in the relevant law enforcement agencies in the Netherlands, following which DDL informed the GRA’s Customs officials. The company said CANU was subsequently informed by both The Netherlands authorities and the GRA.

The company strongly suggested that Dutch law enforcement agents were convinced that it was not involved in the movement of the cocaine and so released the cargo. “Further evidence of DDL’s commitment to protection of its shipments against contamination and international recognition of this commitment is the fact that the authorities in the Netherlands released the shipment to DDL’s control once the illegal substance was removed later the same day of the discovery,” DDL said.

GRA has already ruled out the drugs being placed in the shipping container in Guyana. “The consignment, which originated in Guyana, was scanned in Guyana according to the stipulated procedures, and no contraband or prohibited/restricted substances were detected among the said cargo when scanned,” the agency said..

After 1.5 tons of cocaine in a sealed steel container of scrap metal inside a shipping container, which had originated from Guyana, had been seized in Germany in August 2020, the GRA said it has secured foreign assistance for backup images of the scanning of shipping containers to be stored at multiple locations. “This process allows for simultaneous viewing of the scanned images by officers of the sister agencies, and backup checks thereafter prior to
shipping. GRA also wishes to advise that such images are stored and backed up at various sites thereby
reducing the likelihood of a repeat of the deletion of images,” GRA said.