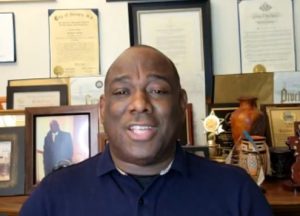 Declaring again that he was not afraid of the People’s Progressive Party Civic (PPPC) administration going after him because of his repeated claims of corruption, genocide racism against African  Guyanese.

“Anybody who talks about it, they attempt to silence. I will not be silenced. I live in the United States of America- the greatest country in the world. The First Amendment of the United States Constitution gives me the  right to free speech. The Guyana government and the PPP does not have jurisdiction over anybody in the Diaspora, over no American citizen, over no Guyanese that live abroad and they will not infringe on my or anyone else’s constitutional right to speak out, to condemn racism,” he said.

Legal and law enforcement experts have explained that an arrest warrant could be issued which could trigger other mechanisms for fugitives to be sent to Guyana.

Mr. Burke contended that the wanted bulletin was issued in direct retaliation to his notice of intended defamation lawsuit for GY$100 million to Vice President Bharrat Jagdeo.

The anti-government activist, who has organised protests against the PPP administration in New York, also announced that he would be intensifying his awareness and lobbying campaign among United States Federal and New York State lawmakers. He said he would be asking for sanctions to be imposed on senior members of the Guyana Police Force, Mr. Jagdeo Attorney General Anil Nandlall.

Responding directly to the allegations cited in the Guyana Police Force’s wanted notice, he described them as “false, they are ridiculous, they are laughable.”

Mr. Burke said the wanted notice amounted to a “blatant and corrupt abuse of the police powers.” He again railed against the killing of hundreds of Afro-Guyanese during the past PPP government and more recent killings.

Earlier this year, the Guyana government found itself having to publicly react to at least three United States Congressmen to assure them that the Irfaan Ali-led administration has been governing fairly and in the interest of all Guyanese.

Prime Minister Mark Phillips and Minister of Governance Gail Teixeira in October had gone to New York to give similar assurances.