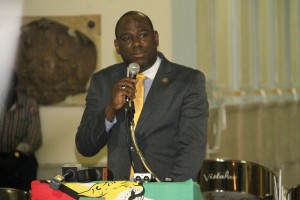 The Guyana Police Force on Friday issued a wanted notice for New York-based anti-government activist, Rickford Burke, who has consistently labelled the People’s Progressive Party Civic (PPPC) administration racist, suggested the need for war and more recently has cited the need for a discussion on whether Afro and Indo-Guyanese should live in separate areas. “He called on the black population to set up a committee to study the issue of dividing Guyana to give the “PPP and their racist cult members the geographical space to segregate and govern themselves, if they don’t want to live in a country with African Guyanese”,”  Burke was quoted in a statement issued by his organisation.

Several months ago, Mr. Burke had complained to New York Police that Attorney General Anil Nandlall had allegedly perpetrated aggravated harassment against him.

In August, 2021, senior representatives of United States law enforcement agencies had visited Guyana and had held talks with the Attorney General on a range of areas. Those included deportations and “the prosecution of fugitives who may have committed offences in either Guyana or the USA, or in both countries.”

Mr. Burke, who has been meeting with a number of American lawmakers, had earlier this year organised a march and rally at which several leading members of the People’s National Congress Reform had spoken. About two months ago, he had also organised a protest against Governance Minister Gail Teixeira and Prime Minister Mark Phillips during their visit to New York.