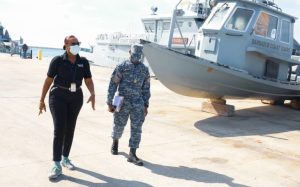 Four Guyanese and one Barbadian have been arrested in Barbados’ territorial waters allegedly with a quantity of marijuana in their possession.

The Head of Guyana’s Customs Anti-Narcotic Unit, James Singh would only say that his agency has been contacted by the Barbadian authorities, the investigation is ongoing and the two sides are collaborating.

Barbados Today reports that the joint counter-narcotics operation also netted the boat which was allegedly used to transport marijuana to Barbados.

Acting Lieutenant Commander of the Barbados Coast Guard Derek Brathwaite said that the operation was conducted on November 24 .

He said it involved teams from the coast guard, the Police Drug Squad and other agencies.

Mr. Brathwaite said that all other information related to this seizure would have to be provided by the Barbados Police Force which has taken over the case for investigations and any possible prosecution.