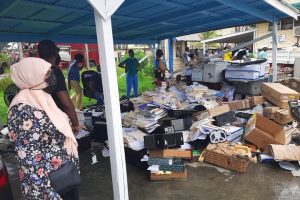 The Director of Public Prosecutions, Shalimar Hack stands next to a pile of paper files, computers and other items that were removed from her Chambers.

The Director of Public Prosecutions (DPP), Attorney-at-Law Shalimar Hack said almost all case files and other criminal records were saved from Saturday’s fire at the building housing her chambers, but the blaze rekindled the urgent need to digitise the system.

“It is something I have been asking for for years now to digitise the system. This shows the wisdom in having a digitised system,” she said.  Ms. Hack acknowledged that she hoped that the fire would “surely” serve as an impetus.

The DPP’s Chambers and the Office of Professional Responsibility were housed in a building on Rabbit Walk, Eve Leary facing the Georgetown Seawall.

Even as police, lawyers and other personnel were busy moving hundreds of case files, cabinets containing documents, printers, law books and other literature, Ms. Hack told reporters that cases would have to be rescheduled until the Chambers reorganises its records. “To some extent, yes, because all the documents are mixed up. We just brought it out in the circumstances of a blazing fire because the fire was raging in the building,” she said. She had no idea when the DPP’s Chambers would become organised again “because it’s a lot of paper.” “It’s not just files for ongoing matters but we have records for matters that are completed…It is a paper-based system so it is a lot of paper,” she said.

The DPP explained that the staff in the Attorney General’s office would be appearing in the Assizes, adding that all the files and depositions would be in the office except for those that the lawyers had for matters that they are currently doing. She said among the now disorganised documents are those by Police Prosecutors for cases before the magistrates’ courts. 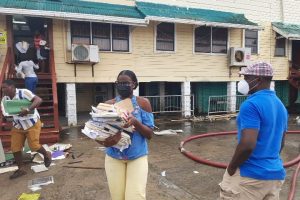 Senior State Counsel Gibbs with files that she rescued from the burning building that houses the Chambers of the Director of Public Prosecutions.

Several police pickups and a bus, and a pickup belong to RK Security Service were seen transporting files to the Guyana Police Force’s headquarters compound.

The DPP said none of the records concerning the electoral fraud cases against former top officials and current staff members of the Guyana Elections Commission (GECOM) and members of the People’s National Congress Reform (PNCR) were not affected by the fire as they are located elsewhere. “The original files for those were not in this office,” she said. Those matters come up for case management and the fixing of a date for trial.

She also said that paper documents and digital storage for other cases were not damaged or destroyed by the mid afternoon blaze. “The DPP’s office was saved and we have been able to save the documents as well as the hard drives for the computers. Now, we thank God for that!,” Ms. Hack said.

Firefighters saved the eastern section of the wooden building, which houses the DPP Chambers, but the middle and western end  that houses the Guyana Police Force’s Office of Professional Responsibility was destroyed.

Police Commissioner, Nigel Hoppie told reporters that although the OPR office was destroyed, cases before that body would not be affected because files are housed elsewhere. “Most if not all of the cases have connections to several divisions also because, as you are aware, we have decentralised Office of Professional Responsibility that is in every region throughout the country,” Mr. Hoppie told reporters. 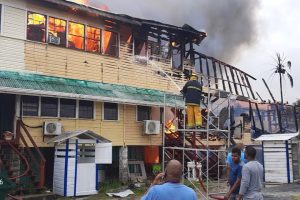 A firefighter on a construction scaffold attempting to douse the flames on the western end of the building which housed the Office of Professional Responsibility.

Coming just over one month after the Guyana Police Force’s ‘A’ Division Headquarters /Brickdam Police Station was destroyed by fire, the Prime Minister declined to be drawn into comment about whether he thought the two were coincidental. “The investigation will help us to determine whether it’s coincidental or if there is some other motive or reason behind this fire so we need to allow the fire service and the police and the law enforcement agencies to do their work,” said Mr. Phillips, a retired Brigadier and former Chief-of-Staff of the Guyana Defence Force.

The Brickdam Police Station had housed the Court Superintendent’s Office.