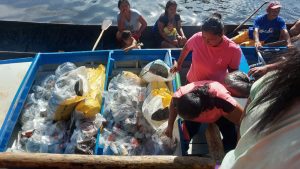 Despite the surfacing of pictures of Indigenous Indian children, who were this week found sick and emaciated in Guyana’s North-West District, Prime Minister Mark Phillips on Saturday stressed that the migrants have been receiving government assistance for more than one year now.

“Even before we assumed office and from August the 2nd (2020) to now, we have continued to send humanitarian aid to those people and not only there,” he told News-Talk Radio Guyana 103.1 FM/Demerara Waves Online News, adding that other groups of migrants in Mabaruma and Region Nine (Upper Takatu-Upper Essequibo) are being supported.

Asked what accounts for the frail condition of the children if supplies were being provided to the area regularly, the Prime Minister said, “we don’t know that; let the medical people determine that.” “Yes, they have children who look like that they are malnourished. They may be malnourished. What is important is that we have a history of intervention in supplying them with foodstuff, medical intervention and we will continue to that,” he added.

A source familiar with this week’s outreach by the non-governmental organisation, Blossom Inc; said one of the children died, one was hospitalised at the Port Kaituma Hospital and another was evacuated by air to the Georgetown Public Hospital for treatment. 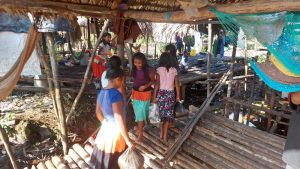 Sources said 20 children in that are badly malnourished. Pictures show a number of abnormally thin and frail young children at Anabisi.

The non-governmental organisation Blossom Inc found the more than three dozen emaciated children at Anabisi, Port Kaituma River, North West District. Sources have described the area, located about 10 minutes by boat from the Port Kaituma waterfront, as heavily populated with migrants Warraus who are speaking their Indigenous language. 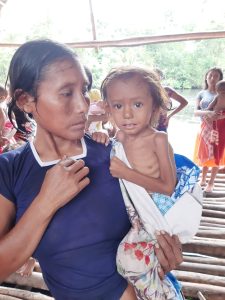 A frail child in the company of an adult. They are among several Warraus who reside at Anabisi, Port Kaituma River, North West District.

Sources said several top government officials and representatives of the United Nations Children’s Fund, International Organisation for Migration and the United Nations High Commission for Refugees, have been informed about the plight of the children. Prime Minister Phillips said a team of doctors and aircraft have been dispatched to the area to possibly airlift more persons to Georgetown for medical treatment.  He added that food supplies were replenished Saturday morning and a medical team went to the location on Friday. “We have additional supplies that are now at Port Kaituma being ferried to Anabisi area,” he said.

Another aircraft with supplies, he said, left Saturday for distribution to Guyanese communities.

News-Talk Radio Guyana 103.1 FM/ Demerara Waves Online News was informed that Blossom Inc. has concluded that “the children are suffering from starvation.” Asked why would they be starving and would they not have access to traditional crops, sources said the Warraus are “living in a swampy area on the side of a river bank; it is rough.”

A number of representatives of the Child Care and Protection Agency of the Ministry of Human Services and Social Security are said to be in the area.