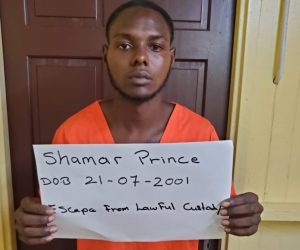 A 20-year old man, who escaped from the Lusignan Prison where he is serving time for robbery under arms, was Wednesday morning recaptured, the Guyana Prison Service said.

“It is alleged that the accused was working on the prison farm when a truck entered the prison compound through the eastern gate and the suspect exited the said gate and made good his escape into the backlands,” the Guyana Prison Service said.

After an alarm was raised, police from the Vigilance Police Station responded and searched the backlands where they recaptured the suspect.

Prince was reportedly told of the offence committed, cautioned, arrested and escorted to the Vigilance Police Station and later handed over to the prison authorities.