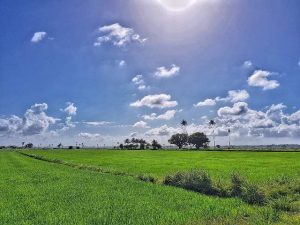 The Rice Producers Association (RPA) on Wednesday floated the idea of importing labour for that grain industry because of a shortage of workers due to lower birthrates, but said so far no application has been made to the government to grant work permits.

He also told Demerara Waves Online News/ News-Talk Radio Guyana 103.1 FM that the labour shortage started years ago when Guyanese migrated and at the same time those remaining here reproduced fewer children unlike decades ago.

“It’s a serious situation where the changes have brought unto us today the problem of labour shortage because over 20 years ago, thirty years ago, people changed and started to make one and two children and this is what caused the problem,” he said.

Mr. Rambrich urged the Guyana government to address the “serious situation” and allow the importation of labour. Asked if the rice industry has applied for work permits for foreign workers, he said the issue has surfaced for more than one year now and it was being addressed at the level of the Private Sector Commission.

The RPA President said a non-governmental organisation Voices Guyana, which looks into the welfare of migrants and asylum seekers, has been approached to determine whether there are  Venezuelans, Cubans and Haitians who would are available to work. He said Voices Guyana was registering migrants . “We are hoping that they can incorporate some of these people to bring them to agencies and companies that need people to work so that we can be able to give them a work permit,” he said.

Specifically about their suitability for the rice sector, the RPA official said they would have to be provided on-the-job training.  He noted that most of the migrants are closer to Georgetown.

Mr. Rambrich said the rice industry in Region Six (East Berbice-Corentyne) was being plagued by a shortage of tractor and harvester operators, and field workers.

According to the RPA official, the Minister of Agriculture Zulfikar Mustapha was aware of the labour shortage, and the need to mechanise aspects of the rice industry.

Touching on the work-ethic of Guyanese workers compared to foreigners, he criticised the Guyana government and families for creating a culture of financial dependency more so as the national economy improves. “We see a change because government is giving handouts, families are giving handouts and some of these people don’t even care to work and I’m sure that, with the economy growing and more will be given with oil coming, people are desperate in wondering when the next handout is going to come and they don’t want to work,” he said.

The RPA President, Minister of Labour Joseph Hamilton, and Minister of Home Affairs Robeson Benn have all said that they had no knowledge about Bangladeshis and Pakistanis being brought into Guyana to work.

The claim first surfaced on Wednesday when Executive Member of the People’s National Congress Reform (PNCR), Aubrey Norton claimed that permission has been granted for two batches of 60 and 50 Bangladeshi and a few Pakistani citizens to be employed in Guyana, in clear discrimination against Haitians who are nationals of a sister Caribbean Community (CARICOM) member state.

Mr. Benn, whose ministerial portfolio includes citizenship and immigration,  bluntly rejected Mr. Norton’s claim. “I know nothing about it and I’m also saying that these people are noted for fake news…It’s his natural reflexes, as a racist to put those things out in the media,” Mr. Benn told Demerara Waves Online News/ News-Talk Radio Guyana 103.1 FM.

Mr. Norton only last month rubbished claims that he was a racist because he was stridently pro-African Guyanese. ““I don’t know why people see me as ethno-centric. I believe, unfortunately, when you are defending a right some people run down the road of saying you’re ethno-centric.  Now, I believe I have the right to defend any ethnic group. At this point of time, I’m defending African Guyanese who are being discriminated against by the PPP. I’m defending Indigenous Guyanese and Indo-Guyanese who the PPP perceive to be APNU+AFC who are under attack including burning down one of their buildings and so I believe that one has to defend all those who are being done wrong. If you consider that to be  ethno-centric, then you’re down the wrong path,” he has said.

Mr.  Hamilton said the two issues of human smuggling and the granting of work permits could not be connected because they are separate and distinct.

Guyana earlier this year stopped granting  automatic six-month stay to Haitians on arrival in Guyana, amid concerns that they were being smuggled to Suriname, French Guiana and Brazil.